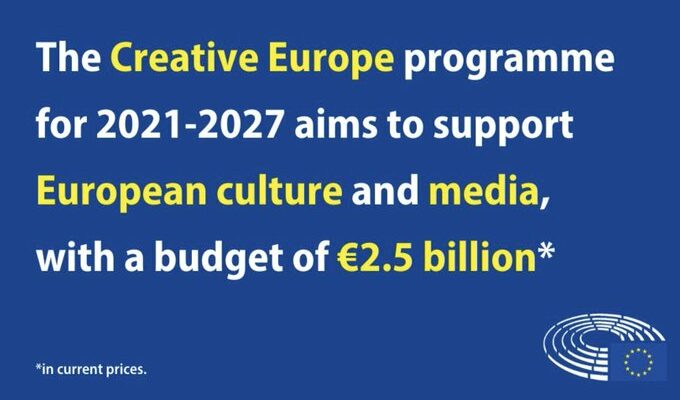 The European Federation of Journalists (EFJ) welcomes the European Parliament’s adoption of the new Creative Europe cultural programme on 19 May. This programme will support European cultural exchange with a budget of around 2.5 billion euros for the period 2021-27, a sum which is the EU’s biggest ever financial commitment to the culture and media sector. For the first time, news media and journalism will be supported as well.

The Creative Europe programme will benefit from a financial envelope set at € 1 842 000 000 in current prices and an additional allocation of € 600 000 000 in 2018 prices with at least 33% allocated for Culture, 58% for MEDIA, up 9% for Cross-Sectoral Strand. Cross-cutting activities are aimed at helping the media sector to face structural and technological changes, including enhancing a free and pluralistic media environment, quality journalism and media literacy.

“We welcome the European Parliament’s hard work for a strengthened and enhanced programme which includes for the first time news and journalism, media literacy, press freedom and quality journalism and a strong component for gender equality. Now it is time also for member states to make concrete efforts in supporting the sector including the news sector and journalism”, said Renate Schroeder, EFJ Director.

“We fully agree with several MEPs who have also asked for an EU-wide social security system for artists and all media workers including freelance journalists based on the model of the German Künstlersozialkasse.”

The European Federation of Journalists (EFJ) has previously co-signed a letter to the German authorities ahead of the presidency of the Council of the European Union during the pandemic, which called for particular attention to be paid to issues of freedom of the press and media. In this letter, signatories asked the EU Member States to adopt an ambitious Multiannual Financial Framework which will strengthen the media sector and support independent journalism. Furthermore, they appealed to significantly increase the budget allocated to Creative Europe with regard to media pluralism, quality (investigative, local, and innovative) journalism, and media literacy.

The Commission proposal for the Creative Europe programme 2021-2027 was published on 30 May 2018. Following the adoption of Parliament’s first reading position on 28 March 2019, inter-institutional negotiations took place from October 2019 to December 2020. Four trilogues and several technical meetings took place under the Finnish Presidency and German Presidency under which the provisional agreement was reached on 14 December 2020. Now finally the way is paved for the European Commission to implement the programme.

Other than the Creative Europe programme, the Council has approved conclusions part of the Action Plan presented by the Commission in late 2020. The Action Plan specifically supports the fast recovery and transformation of the European media sector after the COVID-19 pandemic through several initiatives: MEDIA INVEST, which provides €400 million to support investment in the audiovisual sector, the NEWS initiative, which provides loans and investments to news media, and an online tool, which aims to provide tailor-made and easily accessible information on EU funding opportunities for media companies.

Additionally, member states are invited to take advantage of the Recovery and Resilience Facility, which is the EU’s post-crisis financial instrument, and invest in the acceleration of the digital transformation of the news media and the audiovisual sector.