Belarus: an act of state terrorism to arrest a journalist 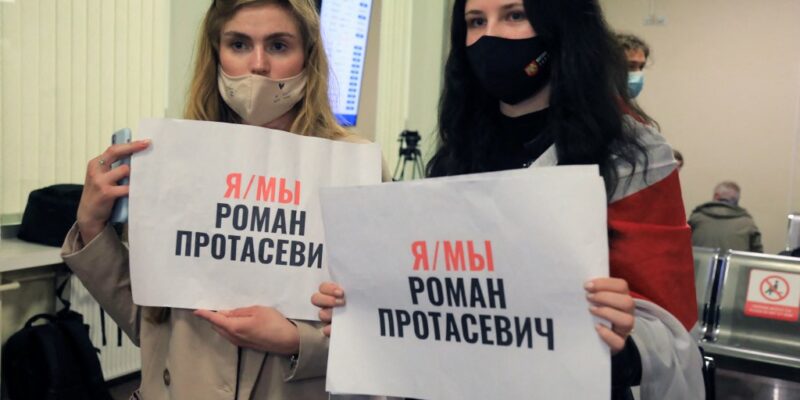 On Sunday 23 May, the Belarusian authorities forced a civilian plane to perform an emergency landing in Minsk. The Ryanair plane, flying between Greece and Lithuania and carrying more than 100 passengers, was forced to land by a Belarusian military aircraft. One of the flight passengers, Belarusian journalist Raman Pratasevich, was retained by the Belarusian authorities and prevented from boarding the plane at the Minsk airport to its original destination. The European Federation of Journalists (EFJ) denounces this act of air piracy and state terrorism. It demands the immediate release of Raman Pratasevich and the 28 other journalists currently detained in Belarus.

“Every week we denounce, together with our Belarusian affiliate BAJ, the increasing repression of human rights and press freedom in Belarus,” said EFJ President Mogens Blicher Bjerregård. “In a few days, the number of journalists behind bars has almost doubled. Sunday’s act of state terrorism was predictable and we regret that the international community did not take our calls for action against dictator Lukashenko seriously.”

“The EFJ calls for the immediate release of Mr Pratasevich and the 28 other journalists and media actors currently detained in Belarus”, added EFJ General Secretary Ricardo Gutiérrez. “We call on the European Union, the Council of Europe and the OSCE to take measures against dictator Lukashenko and those responsible for the repression of press freedom and human rights.”

The EFJ calls for an official international mission to meet with the 29 detained journalists and launch an international investigation to punish all those involved in the repression of journalists and media in Belarus. The political authorities, law enforcement agencies and the judiciary in Belarus must be held accountable. The EFJ and its affiliates are ready to collaborate in this investigation.

The following journalists and media actors are detained at the moment in Belarus (updated list, here):