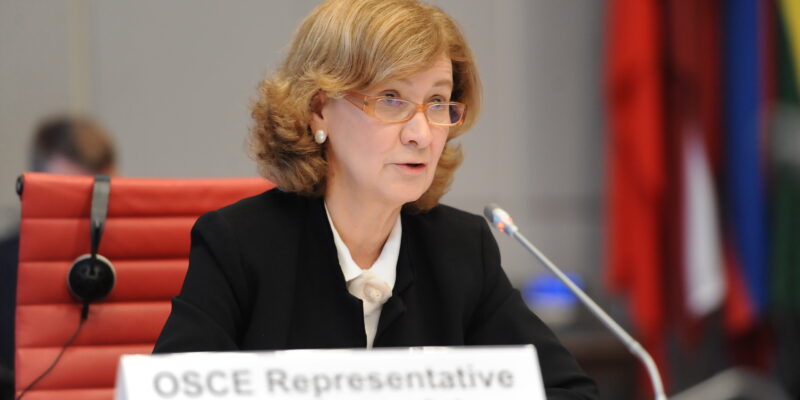 The European Federation of Journalists (EFJ) and its affiliate in Belarus, the Belarusian Association of Journalists (BAJ), welcome today’s statement by the OSCE Representative on Freedom of the Media Teresa Ribeiro urging “the public authorities in Belarus to free all journalists and other media workers who have been sentenced, arrested or detained in the country. Most of these journalists were apprehended for their reporting on public events and other political developments in the country.”

“This systematic clampdown on journalists and media workers is a gross violation of the OSCE commitments related to freedom of expression and media freedom, voluntary undertaken by Belarus as an OSCE participating State,” Ribeiro wrote in a letter to Minister of Foreign Affairs Vladimir Makey, requesting the immediate and unconditional release of all journalists and media workers, who have been recently imprisoned, arrested or detained in Belarus.

Ribeiro referred to the recently arrested editor of Telegram channel “Belarus golovnogo mozga,” Raman Pratasevich, and to dozens of other journalists and media professionals, including the ones on a list compiled by the Belarusian Association of Journalists.

The OSCE Representative on Media Freedom further stated that these repressive measures have a chilling effect, by deterring others from continuing their work without fear of reprisal, lead to self-censorship, and affect the ability of independent media to provide information to the public. “Freedom to receive and impart information and ideas without interference by public authority regardless of frontiers, including through foreign media, is paramount for a democratic society and is one of the basic conditions for its progress and development,” Ribeiro said.

The Representative noted the reports that some of those journalists behind bars had their human rights infringed, including through arbitrary surveillance techniques, beatings, denial of timely legal or consular aid, by forced testimonials of guilt, targeted “leaks” and smear campaigns undermining integrity of their work. “All recent cases of violence by the police against independent media workers in the country have to be fully investigated,” she said. “It is urgently needed that the Belarusian authorities put an end to the current climate of impunity regarding violence against journalists.”

“We welcome Teresa Ribeiro’s call for the immediate release of the 33 journalists and media actors detained in Belarus,” said the EFJ General Secretary Ricardo Gutiérrez. “We also call on European states to stop the hypocrisy. Private Norwegian, German, French, British and other European companies that collaborate with the dictator’s regime must stop this support. It has been more than a week since the regime committed an act of state terrorism by taking a European civilian plane hostage. The world has called for sanctions, but the number of imprisoned journalists continues to rise. It is time for action. Against all those who support the regime, including in Europe.”