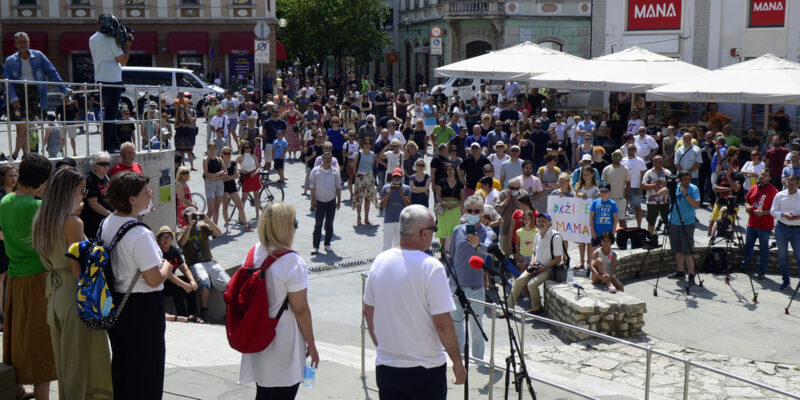 The European Federation of Journalists (EFJ) joined its affiliates in Croatia, the Croatian Journalists’ Association (CJA) and the Trade Union of Croatian Journalists (TUCJ) in condemning the daily paper Glas Istre for dismissing three journalists who openly criticised the paper’s biased editorial policy. Both CJA and TUCJ described the management’s decision to dismiss the journalists as “scandalous” and “shameful”.

The three reporters who were given extraordinary dismissals, Zoran Angeleski, Danijela Basic-Palkovic and Borka Petrovic, accused in late May the daily paper’s editor-in-chief, Robert Frank, of trying to influence coverage of the local election campaign to benefit the long-dominant regional party, Istrian Democratic Party (IDS). Daily editor-in-chief Robert Frank has rejected claims that his editorial line favored the IDS. A fourth journalist who denounced the paper’s bias was not fired as she was protected by maternity leave laws.

Journalist Danijela Basic-Palkovic said the notice sent to her suggested the reason for her dismissal was that she was “a political activist and promoter of certain political groups,” allegations she has denied. The journalists have emphasised that they have contacted the paper’s Management Board before their announcements and they had previously requested a meeting on the issue. Journalist Zoran Angeleski warned of frequent meetings between the editor-in-chief of Glas Istre and IDS leaders, recently and on the eve of the elections.

“This is not only a problem of our journalistic profession, this is a first-class political problem that is happening in Croatia, and Istria is not as open a region as some boast when it comes to journalism”.

He added that CJA and TUCJ support the journalists of the Glas Istre and will inform all domestic and foreign institutions about this “unprecedented retaliation”.

On Saturday, several hundred protesters gathered in Pula in support of the dismissed reporters. Unions have launched a campaign on social networks under the slogan ‘Support the journalists of Glas Istre’ in which other journalists and public figures from across the country are expressing their support through videos or written messages.

Yesterday, the CJA and the TUCJ sent a letter to the management to withdraw the extraordinary dismissals, as the journalists have not committed any breach of employment obligations. Specifically, the journalists have contacted their superiors before making a public statement as required, and did no damage to the employer by expressing their opinions.

According to Maja Sever, President of the TUCJ:

“This case shows how deficient the regulation on local media is. We reiterate the demand to legally change the system of financing local media to ensure their independence from local politicians.”