Georgia: Journalist dies after being severely beaten during Pride march 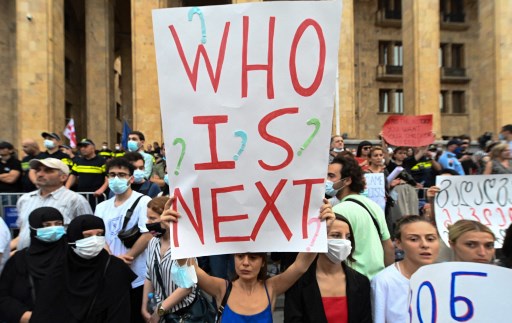 Georgian journalist Alexander Lashakarava was found dead at his home on 11 July 2021, a week after he was badly beaten during the Pride march in Tbilissi. The exact cause of the death is still unknown. The European Federation of Journalists (EFJ) joined its affiliate in Georgia, the Independent Association of Georgian Journalists (IAGJ), in expressing its deepest condolences to Alexander’s family and called on Georgian authorities to conduct a transparent investigation.

A cameraman for independent TV station Pirveli, Alexander Lashakarava, 37, was one of the journalists assaulted by a violent mob of anti LGBTQI+ protesters while reporting from the Pride march in Tbilissi on 5 July. He sustained fractures to his facial bones. According to local media reports, the journalist was treated at the medical centre for four days before returning home.

The Pride was marked by extreme violence leading to its cancelation over safety fears as anti-LGBTQI+ people attacked protesters and media representatives. More than 50 journalists were harassed, beaten and their equipment was stolen and damaged. Media and civil society organisations, including the EFJ, pointed to the failure of the police to protect journalists while performing their duty.

Yesterday, thousands rallied outside the Parliament and the office of ruling party Georgian Dream to call for the Prime Minister and Interior minister to resign over Lashkarava’s death.

In a statement, the ministry of Interior said it launched an investigation “on the fact of unlawful interference with the journalist’s professional activities under the threats of violence, persecution under violence, or threat of violence and group violence” and detained three individuals. One person was charged this morning.

IAGJ president Zviad Pochkhua called for international pressure on the Georgian authorities: “We call for urgent intervention by the European Union to push the Georgian government to ensure the protection of journalists and freedom of expression. Violence from religious and radical groups against LGBTQI+ people and journalists is on the rise and the authorities are simply turning a blind eye.”

EFJ director Renate Schroder said: “We are deeply saddened by Alexander’s death. No one should have been assaulted for their sexual orientation or for doing their job. The authorities must send a strong signal by conducting a transparent and prompt investigation.” She added: “These deadly attacks on media workers are on the rise in Europe and we call on all actors, including citizens, to refrain from it.”

#Georgia Tragic news today, we learned of the death of TV Pirveli journalist Alexander Lashakarava. He was one of the journalists injured after being severely beaten during the Pride march in Tbilisi last week. Our thoughts are with his family @mogensbb https://t.co/xqbMmAoHQ5