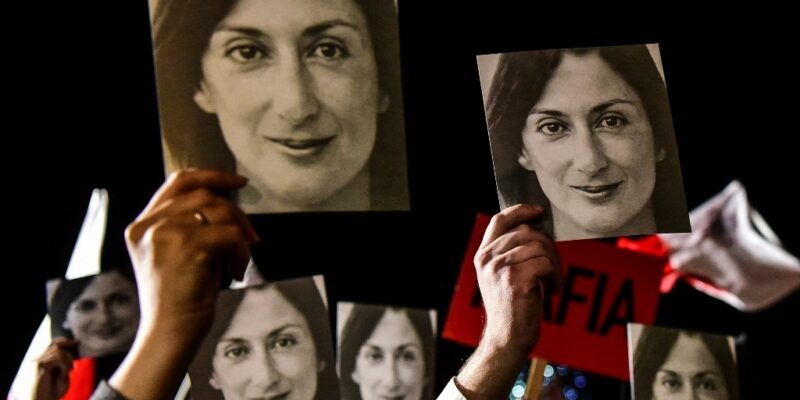 A public inquiry into the assassination of Maltese journalist Daphne Caruana Galizia has found the state responsible for her death. The report said the state had failed to recognise risks to the reporter’s life and take reasonable steps to avoid them.The European Federation of Journalists (EFJ) calls on the Maltese authorities to prosecute all those responsible and to implement the recommendations of the report without delay.

Daphne Caruana Galizia died in a car bomb attack near her home on 16 October 2017. An investigation led to Prime Minister Joseph Muscat‘s resignation in 2019 after his close associates were implicated.

In a 437-page report, the inquiry concluded that a culture of impunity was created from the highest echelons of power in Malta. The report singled out former Prime Minister Joseph Muscat for enabling this culture of impunity and found his entire cabinet collectively responsible for their inaction in the lead up to the assassination. “The state should shoulder responsibility for the assassination,” retired judge Michael Mallia, former chief justice Joseph Said Pullicino and Madam Justice Abigail Lofaro said in their report.

While the inquiry did not find proof of government involvement in the assassination, it created a “favourable climate” for anyone seeking to eliminate her to do so with the minimum of consequences. According to the conclusions, the state failed to recognise the real and immediate risks to Caruana Galizia’s life. It also failed to take reasonable steps to avoid these risks.

“We are not surprised by the findings of this report, which only confirms our suspicions,” said EFJ General Secretary Ricardo Gutiérrez. “Daphne Caruana Galizia was an embarrassment to those in power in Malta. A coalition of political and economic interests created the conditions for her assassination. We demand that all those responsible be prosecuted. We also call on the Maltese authorities to immediately implement the recommendations of the report.”

In particular, the EFJ welcomes the following recommendations:

“We welcome the fact that Prime Minister Robert Abela has pledged to do everything possible to strengthen the journalistic profession and to embark on a number of reforms to ensure the safety of journalists”, added Gutiérrez.

“Journalism needs to be given space to flourish,” Abela said in Parliament during an emergency debate about the findings of the public inquiry into the assassination of Daphne Caruana Galizia. “Scrutiny is important. If you don’t want to be scrutinised you shouldn’t be a public figure. If as a country we don’t understand this we would have learned nothing.”