Slovenia: MFRR calls for a firm response after storming of public broadcaster RTV 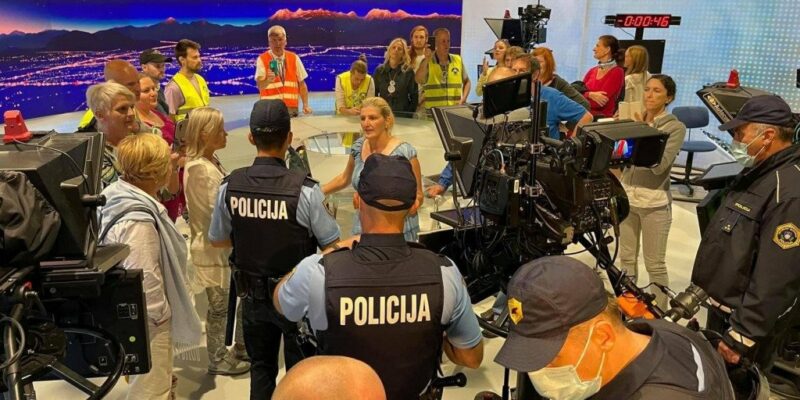 At around 8:30pm on 3 September 2021, protesters broke into the RTVSLO studio in Ljubljana. The group of about 20 protesters, believed to be from the OPS group (Aware Residents of Slovenia), entered the building and managed to break into a newsroom. The group was demanding airtime on RTVSLO platforms to share their anti-vaccine views and an end to what they alleged was “censorship” in the broadcaster’s coverage of the Covid-19 pandemic.

Friday’s attack follows four months of demonstrations outside RTVSLO offices. While protesting outside the building, the group reportedly insulted and harassed staff. RTVSLO filed official complaints to the Ljubljana Police Centre during this time and police have launched an investigation.

After breaking through the security area and once inside the building, maskless protesters roamed the halls making demands and giving speeches denouncing RTVSLO through a microphone. No one was injured and the Ljubljana police said they would investigate the incident and act accordingly. RTVSLO filed a restraining order against the OPS members.

In a press release, the management of RTV Slovenia said that in their “violent intrusion into the premises of Television Slovenia, the protesters grossly abused the right to peaceful protest.” The press release said that security around the building would be strengthened and talks with relevant authorities will be planned.

Manica Janežič Ambrožič, the RTVSLO news programme editor, said it was an “unacceptable attack on the media, journalism and democracy”. Andrej Grah Whatmough, RTVSLO director general, condemned “in the strongest terms” a “grave attack”. Whatmough added that the management had been trying to raise the issue for months, but that because the area outside the RTVSLO building was public property little could be done by the authorities to stop the protesters assembling.

In a statement, the Slovenian Association of Journalists (DNS) denounced an attack on democracy and deplored a general deterioration in the safety of journalists in the country: “The escalation of hostility directed against journalists has been occurring and cultivating in society for some time. The Association has been warning for a long time that hostility on social networks and incitement against journalists and the media we are witnessing can turn into physical violence, which turned out on Friday with the attack on RTV Slovenia.”

The Media Freedom Rapid Response partners join the Slovenian journalists’ organisations in calling on the authorities to send a clear signal that attacks on journalists, media workers and media outlets are unacceptable. The signatories call for a prompt investigation into this case and a firm response brought to those responsible.