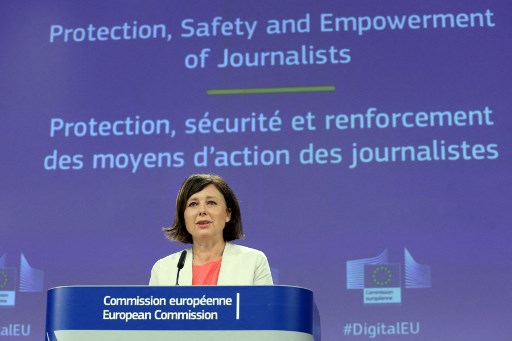 
The partner organisations in the Media Freedom Rapid Response (MFRR) welcome the European Commission’s Recommendation on ensuring the protection, safety and empowerment of journalists and media professionals in the European Union, presented today. The document is a testament to the Commission’s much-needed engagement in the defence of press freedom and media pluralism as critical elements of the Union’s foundational values in the face of increased attacks and threats to journalists and media workers across the region in recent years. At the same time, it serves as an indictment of the lack of meaningful action by a number of member states and candidate countries who, despite the existence of clear laws and standards to improve the safety of journalists and media workers such as those set out in Council of Europe Recommendation 2016(4) among others, have done too little to turn the tide on this worrisome trend.

The Commission’s Recommendation includes a host of measures that, taken together, should drive member states to improve journalists’ safety and put a halt to an emerging climate of impunity, if they are duly implemented. We welcome the repeated call on the member states’ authorities to engage with the media community and seek the views of journalists, media workers and civil society on ways to prevent and address threats and attacks. Furthermore, as partner organisations in a Europe-wide response mechanism, we particularly appreciate the recommendation to set up national independent response and support mechanisms to provide legal advice, psychological support and shelter for journalists and media workers who face threats and attacks. It is evident that the needs in this regard far outstrip capacity, and local action is needed to close this gap: with the MFRR, we have documented no less than 482 incidents in the EU between January 2020 and June 2021, affecting 1256 persons or media entities in 24 member states. Considering moreover that nearly one out of every three incidents occurred during demonstrations, the particular attention paid to this context in the Recommendation is appropriate. Equally welcome is the call for better social protection for journalists and the specific focus on the distinct protection needs of women journalists and those belonging to minority groups or reporting on equality, and those working in non-standard forms of employment, all of whom are particularly at risk.

The key to the Recommendation’s success will lie in effectively following up on its outcomes and holding the member states to account if their implementation is lacking. We call on the Commission to closely involve journalists and media workers, their unions and associations, and civil society in developing the key performance indicators and in the subsequent monitoring of the implementation. In the meantime, we call on the EU’s member states and candidate countries to heed the Commission’s recommendations and step up their action to ensure the protection, safety and empowerment of journalists and media workers.