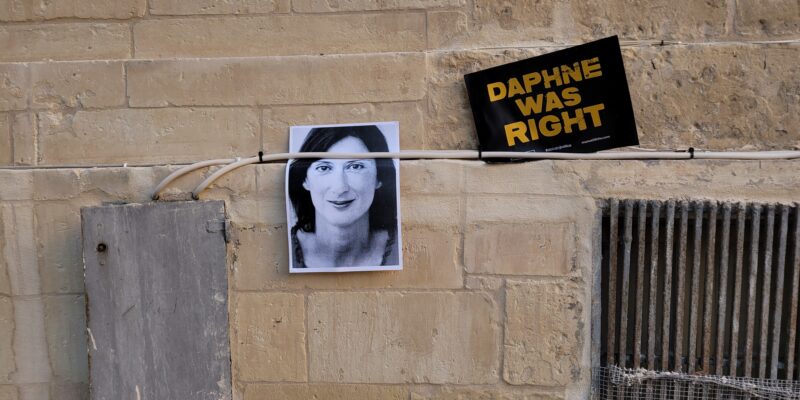 “Implementing the recommendations of the public inquiry report which found that the state must bear responsibility for Daphne Caruana Galizia’s assassination should be a top priority for the government”, said today the Council of Europe Commissioner for Human Rights, Dunja Mijatović, following a visit to Malta from 11 to 16 October. The European Federation of Journalists (EFJ), which also participated in a joint mission to Malta from 13 to 17 October, strongly supports the call by Dunja Mijatović.

“The authorities should swiftly start putting in place the far-reaching reforms needed to ensure journalists’ safety and address mistrust in the media in Malta. This should begin with a co-ordinated response to threats and harassment against journalists, including online, in order to provide adequate protection measures. Enhanced awareness-raising among the police and dialogue between law enforcement and media professionals are vital in this respect”, said Dunja Mijatović.

In addition, this should be strengthened by a proper implementation of the Freedom of Information Act to ensure that journalists have access to accurate and timely information.

She added that recent initiatives to address the problems arising from the use of vexatious lawsuits, commonly known as SLAPPs (strategic lawsuits against public participation), are encouraging. The Commissioner reiterated her previous recommendations to the Maltese authorities to ensure that relevant legislation is adopted without delay.

During her visit the Commissioner met with the Prime Minister of Malta, Robert Abela, public officials, members of civil society, media organisations and international counterparts, including the EFJ General Secretary.

“We fully support the requests of the CoE Human Rights Commissioner and note the commitment of the Prime Minister, whom we also met on Friday, to set up a committee of experts to strengthen press freedom and the protection of journalists in Malta,” reacted EFJ GS Ricardo Gutiérrez. “This commission should be composed of personalities recognised for their expertise, independence and commitment to press freedom and the rule of law. Taking into account the extremely polarised situation in Malta, I believe it is essential to include international experts qualified in the case law of the European Court of Human Rights on freedom of expression”.

The EFJ GS welcomed “the Prime Minister’s pledge to consult with Daphne’s family and the EFJ, Article19, ECPMF, CPJ and RSF the composition of the committee of experts”. “We also welcome Robert Abela’s commitment not to promote a policy of media regulation, to adopt anti-SLAPP legislation with the expertise of our organisations, to introduce aggravated crime provision applying to online and offline attacks on journalists, to discourage party media from campaigning against journalists, and to publicly condemn any violation of press freedom in Malta. We will follow the implementation of these commitments very closely, with our partners and with our Maltese affiliates, the Institute of Maltese Journalists, IGM.”

The murder of #DaphneCaruanaGalizia represents a direct attack on democracy in Malta & beyond. Her memory can be honoured by delivering justice to her & her family, as well as to all journalists. #ProtectJournalists
👉https://t.co/fekpM6Hla7 pic.twitter.com/23prEsKPal