Study: what can journalists do about populism and polarisation? 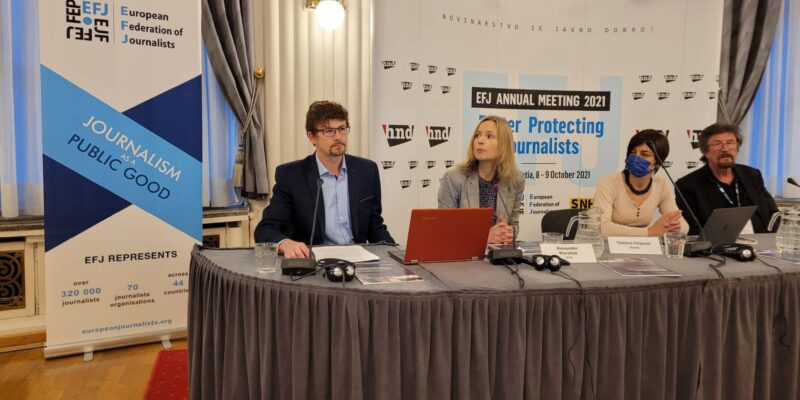 Recent years have seen worrying political developments across both old and new democracies, ranging from the rise of populist leaders and dwindling support for democratic rule to the growing polarization of public opinion. The phenomenon has been studied by The Illiberal Turn project, in which the European Federation of Journalists (EFJ) is involved.

The project launched a report called “Rebuilding trust and countering polarization in (post)pandemic times (Recommendations for media policies and journalistic practices from the Illiberal Turn project.)” The report was funded by the British  Economic and Social Research Council and presented during the EFJ Annual Meeting in Zagreb on 9 October 2021.

The report presents practical recommendations for journalists and policy makers in the context of the rise of populism and political polarisation, looks at news consumption and focuses on media policies and journalistic practices. It aims to complement the existing body of work on media literacy, editorial freedom, disinformation, journalistic ethics, or related topics. Four Eastern European and Central European countries (Czech Republic, Hungary, Poland and Serbia) have been monitored for two years before the report was launched.

The report’s findings can be applied to all countries concerned about the role played by the media in contemporary democracies and the challenges they are facing and the findings are divided in two main themes: the fight against the negative practices of populism and polarisation and the role of the media in the challenges faced by contemporary democracies, including the division of the media, on the rise, and the decline in media freedom in the CEE countries but also across Europe.

The report reminds that the CEE region is under high political stress and that the journalistic profession faces increasing political attacks and faces a lot of economic stress. It insists on the fact that the framing of news influences the audience’s interpretation of the news itself.

The main recommendations are:

A set of recommendations on journalistic practices can also be found, including the fact that internal codes of practices are needed to ensure that media organisations, journalistic associations and related bodies avoid fuelling polarisation, and that recommendations on best practices for journalists during a health crisis should be issued. The need for journalists and media organisations to separate facts from opinions in accordance with the values of impartiality, fairness and accuracy is repeatedly highlighted.

The report found that a widespread idea amongst the interviews in the four countries the survey was carried in is that digital media platforms are more authentic, reliable and less subjected to censorship. This reinforces the need for PSM to have an online and a social media presence, but digital platforms need to be regulated and it opens a new set of challenges.

On the topic of media organisations and how to support them during a public health crisis, the report reminds that information is crucial for public health crisis management. Most of the survey participants said they followed the news about the pandemic on the PSM, but several of them said they thought the PSM were strongly influenced by the government. As a result, they tended not to trust them, often turning to social media instead.

In order to counter this mistrust of the media, the report proposes support in the form of subsidies, direct or indirect, with no link to any political interests. The report also says that regulatory authorities should be more involved in the protection of media freedom, independence and access to information.

The @illiberal_turn project have launched a report with practical recommendations for journalists and policy makers as they attempt to alleviate the negative consequences of polarization and populism.
(@VStetka @SMihelj @lboroCRCC )