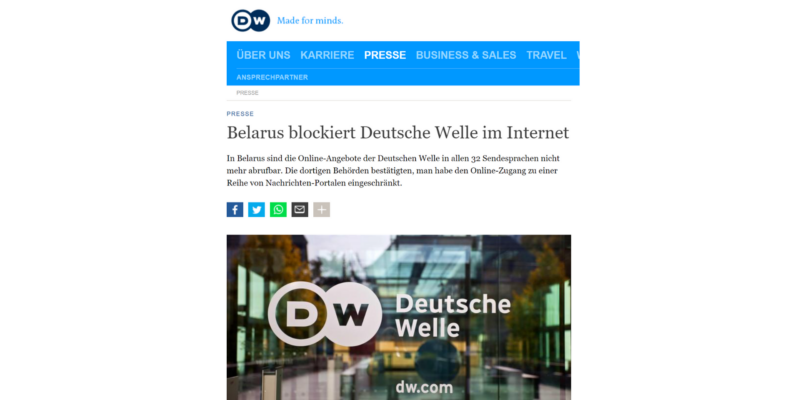 The Belarusian government has blocked access to Deutsche Welle’s website as well as other foreign news portals. The European Federation of Journalists (EFJ) joins its German affiliates, the German Journalists Association (DJV) and the German Journalists Union (dju in ver.di), in condemning this censorship and calling for the website to be immediately re-enabled.

Since 28 October, Deutsche Welle’s website is blocked in Belarus, the German public state-owned international broadcaster informed. The online offers in all 32 broadcast languages are no longer available.

The Ministry of Information in Minsk justified the step of the state agency Belta by the fact that the broadcaster had hyperlinked to content that court orders classified as “extremist”.

“This claim is absurd,” criticised DJV President Frank Überall. “Deutsche Welle spreads critical and independent journalism. Anyone who sees extremism in this is apparently very afraid of the truth.”

Peter Limbourg, Deutsche Welle (DW) director, spoke of “an act of desperation” on the part of the Belarusian leadership. “The accusation against DW is absolutely ridiculous,” he said.

“Mr. Lukashenko has shown that he will not stop in the fight against his own people in order to maintain his power. The heavy use of independent media offers clearly shows that people in Belarus no longer trust the state-controlled media. We protest against the blocking of our offers because the people there have a right to objective information about the situation in their country,” Limbourg added.

The German ambassador in Minsk asked the foreign ministry there for an explanation of the incident and demanded that access to the DW website be re-enabled immediately. Apart from DW, the US embassy also had to close its press office and an office for development work under pressure from the authorities.

Mogens Blicher Bjerregård, EFJ President, reacted: “Again, now by blocking DW, Belarusian citizens are facing a new attack by the Lukashenko dictatorship. This time on their right to information. Free flow of information is crucial for the development of our societies. Again, we call on the international institutions to push for freedom of information in Belarus. We must remember that an attack on freedom and human rights in Belarus is an attack on all of us and concerns all of us.”

DW had considerably expanded its offers for Belarus in the spring in order to document the awakening of the civil society in a country that has been marked with violence, censorship and imprisonment since the illegitimate reelection of President Lukashenko.