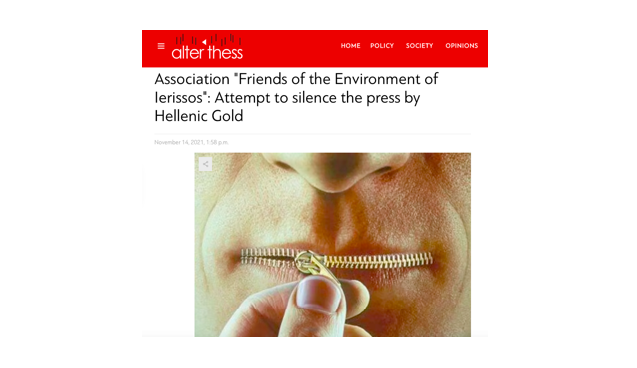 
The European Federation of Journalists (EFJ) joined partners of the Media Freedom Rapid Response (MFRR) today express serious concern over a SLAPP (Strategic Lawsuit Against Public Participation) targeted against the small independent media outlet Alterthess and its journalist Stavroula Poulimeni by a Greek gold mining executive convicted of serious environmental crimes. Our organisations note that this case again underscores the need for a swift European Union directive and Council of Europe Recommendation to protect journalists and media outlets reporting in the public interest from this kind of abusive litigation.

On 19 October 2021, the cooperative journalistic website Alterthess in Thessaloniki received the lawsuit filed against them by Efstathios Lialios, an executive at the firm Hellas Gold. It demanded €100,000 in damages over an article the site had published on 27 October 2020, alleging it had illegally processed his “sensitive personal data”  when it reported his criminal conviction. It argued the plaintiff’s names should not have been published and that Lialios’s reputation was damaged as a result, jeopardising his ability to find new work. The lawsuit also threatened Poulimeni with criminal sanctions.

The article, ‘Two high-ranking executives of Hellas Gold were convicted of water pollution in North Halkidiki’, reported the first instance conviction of Lialios and a colleague, the then CEO of Hellas Gold, for the company’s responsibility in the systematic pollution of the local water in Halkidiki with heavy toxic metals and liquid waste. The pair were accused of failing to monitor, control or report to authorities the pollution of surface water, which vastly exceeded the legal limit and caused serious environmental degradation. Hellas Gold is a subsidiary of the Canadian Eldorado Gold Corporation.

The article by Poulimeni reported the initial verdict, which was made by the Court of First Instance of Polygyros. The Court of Appeal of Thessaloniki later confirmed the verdict on 1 September 2021, with the two executives handed a suspended sentence. Shortly after this second decision, Lialios filed the lawsuit:  a full year after the original article was written. The legal case against Alterthess and Poulimeni is due to be heard in court on 25 November 2021.

Rather than aimed at settling a legitimate legal dispute, our organisations believe it is clear that this lawsuit is aimed at silencing Alterthess and Poulimeni by forcing them into a time-consuming and costly legal battle, draining them financially and discouraging them from further reporting. For the last decade, Alterthess and Poulimeni have documented the impact of Hellas Gold’s mining operations on the environment and the local community. The extortionate financial demands seem to be an attempt to intimidate the publication and drive it to financial ruin. We therefore consider this a Strategic Lawsuit Against Public Participation (SLAPP).

The grounds for the lawsuit are baseless. Court reporting by journalists and media is legally protected because of the importance of informing the public at large how justice is done. The trial was held in open court, without reporting restrictions, and the verdict was publicly available. Given the seriousness of the environmental crimes, publishing the names of the plaintiffs was both standard journalistic practice and overwhelmingly in the public interest. We cannot avoid the conclusion therefore that this lawsuit is an effort by Lialios to shield himself and Hellas Gold from critical coverage and punish Alterthess for its reporting.

This lawsuit is not a proportionate or principled attempt to seek legal redress. We therefore urge Mr. Lialios to withdraw the claim and refrain from trying to weaponise civil law in the future. If the case ends up before a court, our organisations hope that the court will take into consideration the European Court of Human Rights standards on article 10 of the European Convention on Human Rights. Concerningly, this is not the first time that Hellas Gold has used the threat of legal action to bully those critical of its operations. This is, however, the first time that a media outlet has been the target.

This case is yet another reminder of the need for an EU Anti-SLAPP Directive that creates preventive measures and procedural safeguards to better protect journalists from abusive lawsuits by rich and powerful individuals. The overwhelming adoption by MEPs on 11 November of a report on SLAPPs was a timely reminder of the seriousness and urgency of this issue, one that sends a clear message to the European Commission that far-reaching legislation is needed. Our organisations stand by to assist the Commission and are preparing our submission to its public consultation on anti-SLAPP regulation.

With such a Directive in place and legislation implemented at the national level, we hope cases such as this involving Alterthess will be immediately dismissed or avoided altogether. Until then, the MFRR expresses our full support and solidarity with the affected journalists and all other battling abusive gag lawsuits. We will continue to monitor this case closely, have reported the lawsuit to the Council of Europe’s platform for the protection of journalism, and will provide immediate financial support to help fund Alterthess’ legal defence.