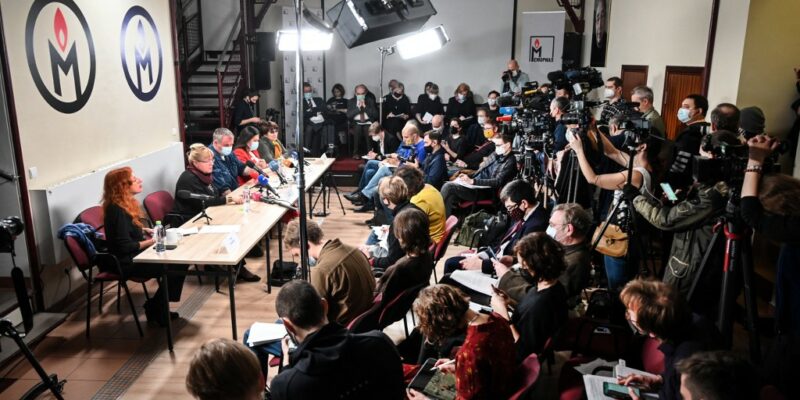 The European Federation of Journalists (EFJ) and the Russian Journalists’ and Media Workers’ Union (JMWU) join PEN International, PEN Moscow and St Petersburg PEN in condemning the Russian authorities’ move to shut down Memorial International Society and its sister organisation Memorial Human Rights Centre, which are amongst the most prominent civil rights organisations in Russia. The EFJ urges the Russian authorities to drop the lawsuits against Memorial, and to end their crackdown on freedom of expression and association.

On 11 November, the Russian Supreme Court notified Memorial International Society that prosecutors have filed a lawsuit to liquidate the civil rights group over alleged violations of a law on “foreign agents”. The case will be heard on 25 November. On 12 November, Memorial Human Rights Centre was informed by the Moscow City Court that the Moscow City Prosecutor’s Office had filed a similar lawsuit against them. A date for the court hearing has yet to be set.

Memorial joins a growing list of investigative news outlets, journalists and rights organisations to have been labelled a “foreign agent” this year.

“Memorial’s work is a crucial source for journalists in Russia. The attacks against Memorial should be seen by journalists as an attack against independent journalism,” said the EFJ General Secretary Ricardo Gutiérrez.

“Memorial is a very important media actor in Russia. The group provides information to journalists on all human rights issues. It also maintains the list of political prisoners and defends the rights of journalists and press freedom in Russia. We fight together for the release of imprisoned journalists. The liquidation of Memorial would be a terrible setback for press freedom in Russia”, added Nadezhda Azhgikhina, the director of PEN Moscow and former Vice-President of the EFJ.

“Memorial is a network of organisations that has always supported and protected independent journalists in Russia. The group is a unique source of information for colleagues working on Russian history and human rights issues,” said Sofia Rusova, co-chair of JMWU. “This attack is not only an attack on freedom of expression, but also on freedom of thought and historical memory.”

Proceedings to shut down Memorial groups on the grounds of the “foreign agent” law are another illustration of reprisals against civil society and #HumanRightsDefenders in #Russia. The authorities should discontinue their liquidation and repeal the law. https://t.co/QoPRlovwjk