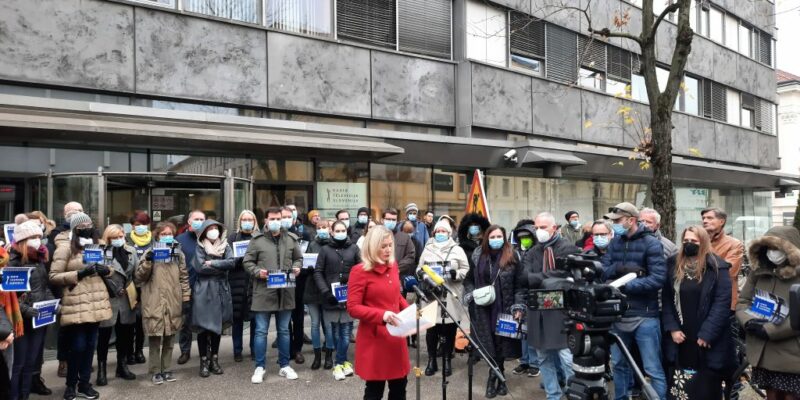 
The European Federation of Journalists (EFJ) joined the partners of the Media Freedom Rapid Response (MFRR) today to express concern over proposed modifications to news programming at the Slovenian public television RTV, which would reduce the broadcaster’s ability to inform the public and scrutinise power. We therefore urge the broadcaster’s management to enter into dialogue with its editorial board to ensure adjustments are proportionate and in the best interest of public interest reporting.

Under the draft Program-Production Plan (PPN) for 2022, shows such as the flagship foreign policy programme, Globus, and many news talk shows would be cancelled. Daily news programs such as Dnevnik and Slovenska kronika would be shortened, while others would be shifted to the broadcaster’s second channel, which has far lower viewership. Election programming would likewise be transferred to the secondary channel, where it would be broadcast in the absence of major sporting events.

The proposed shakeup has already proven controversial. In October, the editor-in-chief of the TV Slovenia news program, Manica Janežič Ambrožič, stepped down in protest. She was followed by three other TV Slovenia editors: Dejan Ladika, Meta Dragolič and Mitja Prek. A letter criticising the scale of the changes was recently signed by more than 90 percent of employees, who argued it would limit their ability to produce quality public service reporting.

Since the letter was sent to the management, headed by new RTVSLO director Andrej Grah Whatmough, only minor amendments have been made to the draft changes. RTV management has said the alterations to programming are necessary due to the current financial situation, the departure of employees and low ratings of news shows. RTV’s program council is due to vote on the proposals during its next meeting on Monday, November 29.

Both EFJ affiliates, the Slovene Association of Journalists (DNS) and the Trade Union of Journalists of Slovenia (SNS), have spoken out against the changes, which they argue are unrealistic, unfeasible and will be detrimental to the quality of journalistic content and the future development of the broadcaster.

Our organisations are concerned that, in their current form, these changes will marginalise public interest reporting and undermine the broadcaster’s core mission: to provide the country’s citizens with professional and informative reporting on both domestic and foreign current affairs. We are also concerned that these changes have been developed without sufficient consultation. It is vital that such changes to programming must be proportionate and, crucially, have the support of the editorial board.

The quality and content of a country’s public broadcasting is a mirror to the overall strength of its media landscape. Despite its financial challenges, RTVSLO has historically ranked among the best and most independent public service broadcasters in the region. While all parties agree that reform to its funding model is urgently needed to improve its finances, it is crucial this is done without jeopardising its core journalistic mission.

We therefore call on the Radiotelevizija Slovenija program council to postpone its meeting until further dialogue is conducted by management with RTV employees. Separately, we also urge the National Assembly to ensure adequate and sustainable funding for RTVSLO that allows it to provide a high standard of news reporting, as well as uphold the commitment to public service news determined by the RTV Slovenija law.

Over the last year, journalists at RTV have faced increasing intimidation and threats both on social media and on the streets. Conspiracy theorist protesters recently stormed the headquarters and impeded broadcasting. Editors have endured relentless disparaging smears and attempts to discredit their work by elected politicians. Concerns have meanwhile been raised about politicised appointments to oversight bodies. We hope the proposed changes to RTV programming and production will not create additional pressures in the coming months.