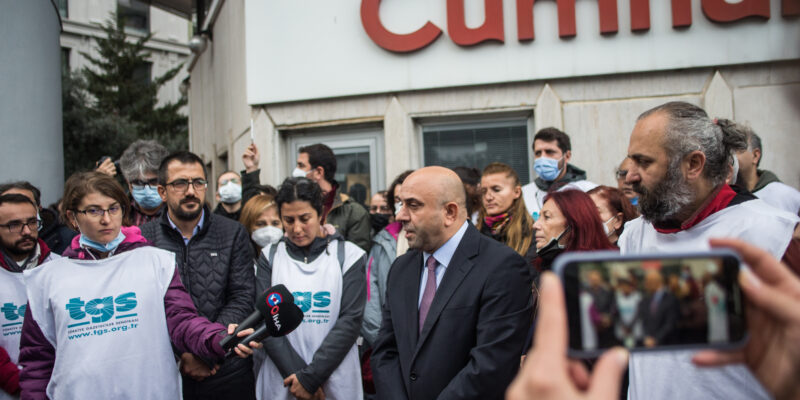 After the Journalists Union of Turkey (TGS) signed its first collective agreement in 18 years with the newspaper Cumhuriyet in mid-November, the management dismissed eight journalists and union members. TGS understands this to be a discriminatory and retaliatory move against union organisation. The European Federation of Journalists (EFJ) joined its Turkish affiliate in the call for the journalists’ immediate reemployment.

In response, on Tuesday 30 November, TGS organised a protest with journalists and press freedom advocates in front of Cumhuriyet’s headquarters in Istanbul at 11 am local time. Although Cumhuriyet put forward economic reasons for the dismissals, TGS General Secretary Mustafa Kuleli stressed that this decision showed that the newspaper’s management “continues its anti-union policies.” All affected colleagues were active in the trade union struggles.

“We call on the management of Cumhuriyet newspaper to abandon this erroneous decision as soon as possible and to comply with the provisions of the collective bargaining agreement they have signed,” says TGS.

Cumhuriyet’s editor-in-chief Aykut Küçükkaya said during the protest that the board’s decision was taken without his consent. Calling on the board to retract the decision and reinstate the laid-off employees, Küçükkaya added that he would “continue to support the struggle of the journalists who were fired.”

Cumhuriyet journalists cited the Cumhuriyet Foundation’s chair Alev Coşkun, its Secretary-General Işık Kansu and board members Osman Özer and Adnan Arslan “as the architects of the decision, which stained the history of the newspaper.” The journalists called for the four board members to resign.

EFJ President Mogens Blicher Bjerregård reacted: “Union membership is a fundamental right that must be respected by all parties. The organisation of employees and employers is a cornerstone of the social dialogue with both decent working conditions and constructive leadership fostering a thriving labour market. The EFJ firmly urges Cumhuriyet to respect their employees’ right to organise.”

#Turkey The management of #Cumhuriyet newspaper just fired eight journalists, all members of @TGS_org_tr. The union denounced an act of discrimination and retaliation after the recent signing of a collective agreement. We join call for their re-employment ✊#solidarity https://t.co/VgaJXjGYNF