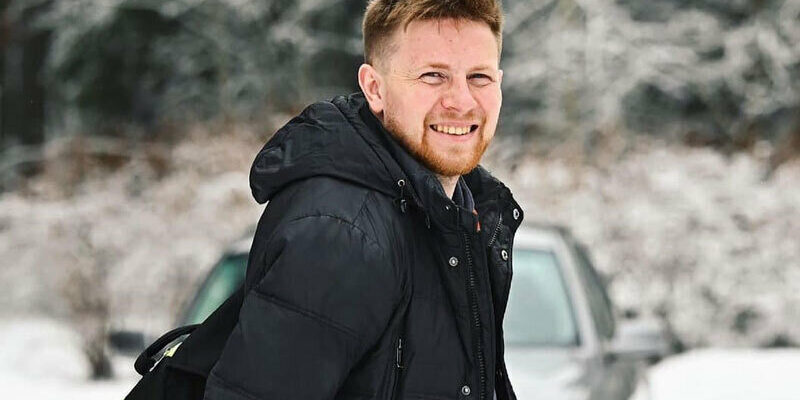 Belarusian journalist Aliaksandr Ivulin was sentenced to two years in prison on Wednesday, 19 January 2022, for his protest coverage. On the same day, freelance journalist Seviaryn Kviatkouski was detained upon his arrival in Belarus. The European Federation of Journalists (EFJ) joins its affiliate, the Belarusian Association of Journalists (BAJ), in condemning the ongoing crackdown on critical journalists in the country.

In a criminal case against the well-known sports journalist and Krumkachy football player Aliaksandr Ivulin, the Savetski District Court of Minsk ruled a two-year prison sentence and found the journalist guilty of “organising and preparing actions that grossly disrupt public order, or active participation in them” (Article 342 of the Criminal Code).

Ivulin covers soccer for Tribuna, Belarus’s largest independent sports news website, and runs the soccer-focused YouTube channel ChestnOK. He was detained on 3 June last year in his apartment, under the pretext of having an unauthorised flag in his window, which Ivulin denies. He served 30 days of administrative arrest and was accused of participating in illegal protests in Minsk that he was covering as a journalist. On 9 July, he was charged under Article 342 of the Criminal Code.

According to the prosecution, on 23 August and 29 September 2020, Ivulin took part in group actions that “grossly violate public order”, and also organised such actions by posting videos on YouTube since 7 August 2020. These videos were described as “of an inciting nature in order to create a negative assessment of the current government.” Minsktrans also sued Ivulin for 39,000 Belarusian rubles (€13,260) for damages for stopping traffic during the protests.

Ivulin pleaded not guilty and stated that he did not block roads or organise any actions.

“The real reason for his arrest and conviction is to intimidate the profession and deter journalists from doing their job and covering the protests against the regime of dictator Alexander Lukashenko,” reacted the EFJ General Secretary Ricardo Gutiérrez. “Journalists covering these protests are falsely accused by a corrupt judiciary of being organisers of these protests. This demonstrates once again the totally illegitimate nature of the regime and the judiciary that serves it.”

BAJ highlighted the importance to cast light on the continuous repressions in Belarus. “Freelance journalist Seviaryn Kviatkouski was also detained on criminal charges for comments on social media on his return from Poland on Wednesday. After half a year in relocation, he had decided to come back home for a while”.

Today, 32 media workers remain imprisoned in Belarus. In 2021, 113 detentions of journalists were recorded.