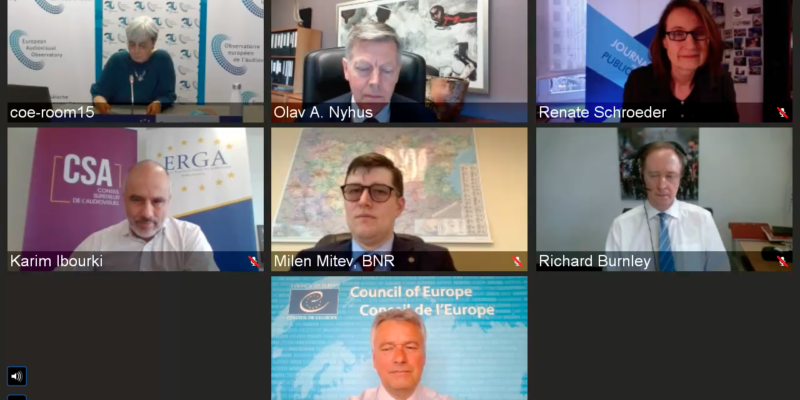 On 23 February 2022, the European Audiovisual Observatory hosted an online conference to discuss public service media in light of the European Media Freedom Act (EMFA) launched by the Commission on 10 January 2022.

The new legislation is supposed to pave the way for greater support to recover the media sector from the pandemic, to offer larger support and regulations in favor of freedom of speech among journalists working within the European Union, and to empower pluralism of ideas across the Union.

In her opening speech Executive Director of the European Audiovisual Observatory Susanne Nikoltchev stressed the importance to adapt and protect public service media’s independence from both political interferences and private conglomerates competitors and referred to the just published report  by the European Audiovisual Observatory on ​​Governance and independence of public service media.

Commissioner for Values and Transparency Vera Jourova said that the European Media Freedom Act is an unprecedented legal initiative to consider media as an essential pillar in the context of the internal market and guarantee the highest professional standards of journalists.

How to address and ensure editorial independence among the PSM has been at the center of the second panel during which Patrick Penninckx, Head of Information society department, Council of Europe acknowledged the importance of report tools such as the Council of Europe Platform for the protection of journalists in showing the “dire picture of what is going on today: the media environment it is very subjected to the political one” despite all the accommodations and good practices provided by the EU Commission when the pandemic first hit.

EFJ Director Renate Schroeder referred to the Media Pluralism Monitor, which recorded that, in 2021, independence is at risk in 15 countries of the 32 countries covered.

“It is the culture of political influence combined with constant economic pressure, which puts this independence at high risk. Editorial principles, which do exist in most PSM, will only be protected when known by journalists, implemented and when they will be persisted by the PSM management to get it widely recognized and defend it on all levels”. And she insisted that “such political will must be guided by EU legislation, implemented at the national level and endorsed by EBU national members without compromise. ”

With regard to the European Media Freedom Act, the EFJ fully supports the following measures regarding PSM:

Karim Ibourki, President of the European Regulators Group for Audiovisual Media Services (ERGA), referred to the role of media regulators who include in their remit editorial freedom, but in his mind, also the working conditions of journalists, which need to be improved.

With regard to the future, all the panelists agreed on the importance of sustainable and predictable funding to face challenges head.

The EFJ also participated in the UN-EU High-Level Policy Dialogue on the protection of journalists on 24 February and insisted on the need to get a strong European Media Freedom Act as an overdue legal tool to correct some very dangerous developments in the Member States.

Secure transparency in media ownership and control media concentration; strengthening of independent media regulators as well as self-regulatory bodies such as media councils and creating an a-enabling environment for independent journalism are crucial pillars for a strong EMFA.

The EFJ will have an online meeting with its affiliates and some experts on its submission on 3 March.