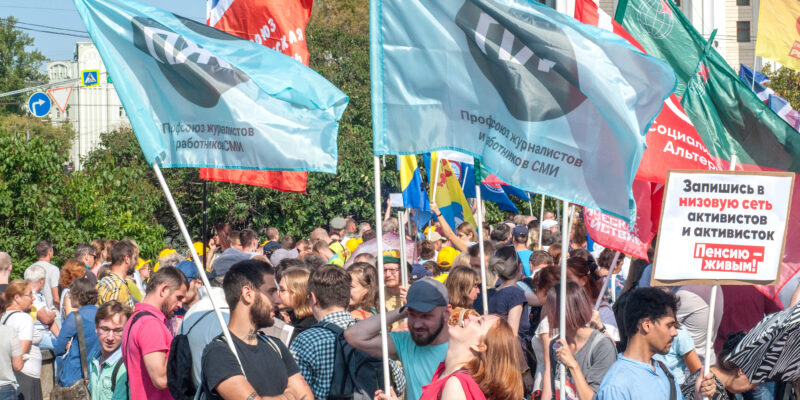 The independent Russian trade union JMWU on 7 March issued a message of solidarity to Ukrainian and Russian journalists who are trying to do their work in the public interest in an increasingly difficult environment: “Let’s call a spade a spade. Peace is peace, and war is war. Any war is accompanied by violence and confusion. In one place they shoot, in another they are subjected to repressions. Real courageous reporters – of which there are few – are trying to do their duty in order to give the society the most reliable information about what is really happening in Ukraine. Unfortunately, in these extreme conditions, many journalists have faced various difficult problems. We, journalistic organizations in Russia, Ukraine and other countries, are trying to solve them to the best of our ability. This difficult task requires the participation of everyone who can and wants to help colleagues.”

(…) “Today, many of our colleagues from Vladivostok and Nizhny Tagil to Lvov, Istanbul and Krakow have suddenly found themselves in a frightening situation. Someone was forced to flee from shelling, others from repression. Almost every case is individual, since life, alas, is multifaceted, not only in joy, but also in sorrow.”

“At the same time, what is happening in Ukraine and around it caused a powerful wave of sympathy and solidarity. Many of our colleagues from different countries are ready to help. We, as the only independent journalistic organization in Russia, are in constant contact with the National Union of Journalists of Ukraine, Turkiye gazeteciler sendikasi, journalistic organizations of the Baltic and Caucasian countries, which are members of the Common Federation of European Journalists (EFJ). Various interstate organizations and international NGOs are also ready to join in solving this or that difficult situation.”

JMWU calls on all journalists who find themselves in difficulty to contact the Russian trade union via its Telegram account: @profjursupport_bot.

The EFJ also wishes to give its full support to the Union of Journalists of the Russian Republic of Karelia, which is challenging the censorship laws adopted by the State Duma and their implementation by the Russian regulator RKN. In a statement sent to the General Prosecutor’s Office of Russia, the union says that “the idea that a journalist has no right to use sources other than official sources when preparing a story is contrary to the principles of our work.” The union also says that “the ban on the use of the word “war” when describing the actions of the Russian army in Ukraine is unjustified, senseless and illegal.”

“As hundreds of Russian journalists seek to leave the country under a terrible wave of censorship and repression, it is reassuring to see these courageous professional organisations standing up against the arbitrariness of the Russian authorities,” said EFJ General Secretary Ricardo Gutiérrez. “We must support Ukrainian journalists who are facing bombs and war crimes from the Russian army. But we must also support independent Russian journalists who are standing up to Putin’s authoritarian regime.”