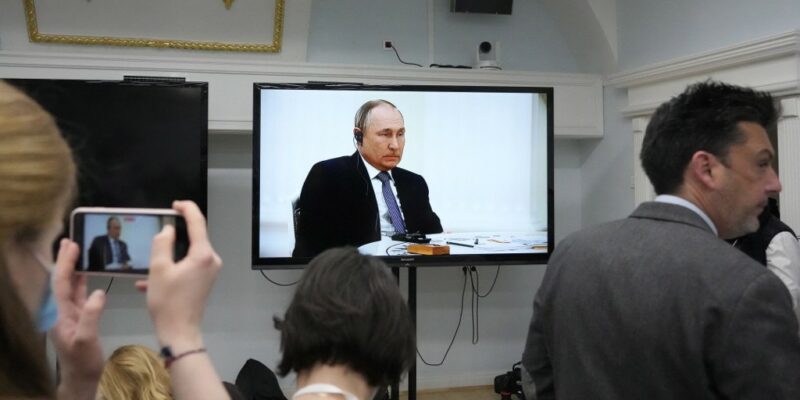 Russian authorities blocked access, on Tuesday, to two of the country’s most important independent media: Dozhd TV and Ekho Moskvy radio. In addition, the State Duma is considering a bill on criminal penalty for alleged fake news about Russian army operations. The European Federation of Journalists (EFJ) strongly condemned these attempts to silence media coverage of Russia’s invasion of Ukraine.

Russia has blocked Dozhd TV and Ekho Moskvy for allegedly spreading “deliberately false information” about Moscow’s invasion of Ukraine. Both websites were unavailable in Russia shortly after the announcement. The move comes six days after Russian troops attacked Ukraine.

Russia’s prosecutor general ordered the country’s media watchdog RKN to “restrict access” to Dozhd TV channel and Ekho Moskvy radio. The ban comes over the alleged “purposeful and systematic” posting of “information calling for extremist activity, violence” and “deliberately false information about the actions of Russian military personnel” in Ukraine.

The Russian authorities are increasing the pressure on journalists who try to cover the Russian invasion. A bill introducing criminal penalties for fake news about Russian army operations may be discussed in the State Duma as early as on Friday, March 4. Chairman of the State Duma Security and Anti-Corruption Committee Vasily Piskaryov said on February 28 that the bill was being drafted. He also said that such crimes would be punishable with up to 15 years in prison. State Duma Speaker Vyacheslav Volodin backed up the bill.

“This new wave of censorship against independent media and journalists comes on top of the restrictions imposed last week by the state media regulator RKN,” said Ricardo Gutiérrez, EFJ General Secretary. “This proves that Putin’s regime is more afraid than ever of journalists’ work on the invasion of Ukraine and the war crimes committed by the Russian army. These attempts are futile: Mr Putin is under the illusion that he can hide the truth from a public opinion in Russia that no longer hesitates to express its opposition to the war.”