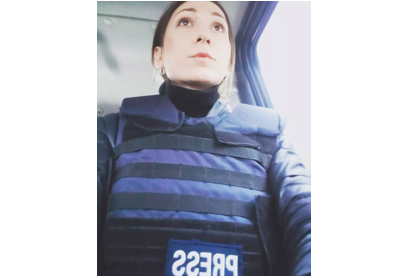 Ukrainian media outlet Hromadske has revealed today that one of its journalists, Victoria Roshchina, has been missing since 15 March 2022. The media fears that she is “a prisoner of the Russian occupiers”. The European Federation of Journalists (EFJ) calls for her immediate release.

According to Hromadske, Victoria Roshchina had planned to go last week to Mariupol, a city that has been shelled by Russian troops for more than two weeks. On 12 March, her colleagues were unable to make contact. She was probably detained a few days later, on 15 March, by Russian forces in an unknown location.

“For two days we did everything  we could to release the journalist in a private manner. But this proved to be ineffective. Therefore, we call on the Ukrainian and international community to share the information and take action for the release of  journalist Victoria Roshchina,” wrote Hromadske on its website.

A few days before, on 11 March 2022, Roschina was shot at when her vehicle passed a column of Russian tanks near the city of Zaporizhia. The journalist and her driver were not hit by the bullets. They managed to get out of the vehicle marked “press” and take refuge behind some abandoned houses nearby. Roschina said that, while they were hiding, Russian soldiers stole her laptop, camera, and other belongings from the car.

Ukrainian journalist Oleg Baturin has also been reported missing since 12 March. He was last seen in Kakhovka, a city in the Kherson region occupied by Russian forces.