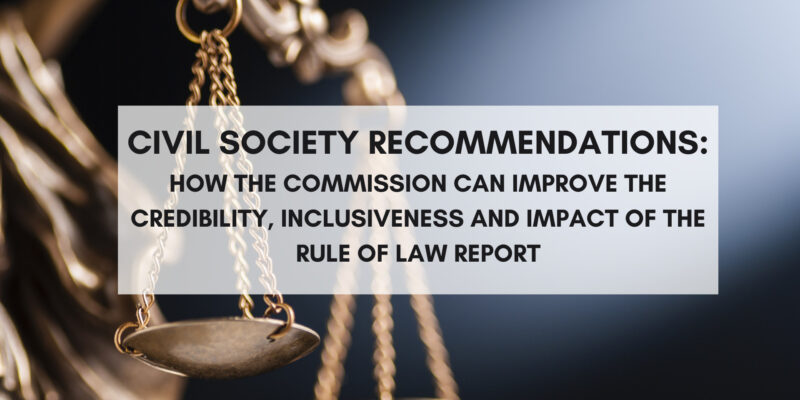 The European Federation of Journalists (EFJ) joined civil society, media and journalist organisations committed to the EU’s efforts to champion the rule of law in Europe to provide advice for strengthening the 2022 rule of law reporting cycle with a civil society statement. This followed other efforts to strengthen the process.

As the reporting cycle has entered its third edition, we welcome progressive improvements such as the inclusion of country-specific recommendations. These recommendations are key to ensuring follow-up actions to the reports, thereby strengthening their impact and accountability on national-level and EU-wide reforms on the rule of law.

Strengthen the impact of the reports with concrete recommendations, national dialogues and conditionality

A number of small reforms would have a multiplier effect on the impact of the reports, making the most of our collective annual reporting efforts. To this end, the Commission should:

Many of our previously issued concerns regarding the inclusiveness of the consultation process remain unaddressed. This year’s public consultation was announced just days before its launch and did not foresee more time to provide input. The calendar of country consultations has not yet been announced publicly and we have no indication our recommendations for the methodology have been addressed. Our previously-issued recommendations for strengthening the inclusiveness of this multi-stakeholder process thus remain valid.

Act on the priority recommendations of civil society:

Finally, we put forward the following priority recommendations that apply across the Member States. These Europe-wide reforms are essential to the future of democracy, the rule of law and human rights in the EU. To this end, the Commission should: