Croatia: Union reports over 900 lawsuits against journalists and media 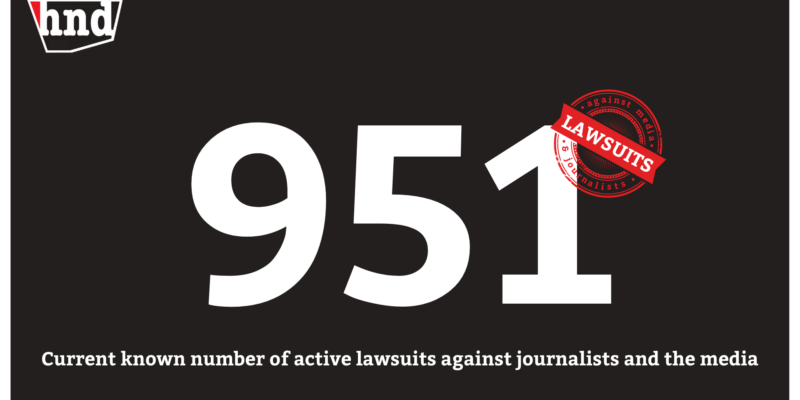 There are at least 951 active lawsuits against Croatian journalists and media in which plaintiffs are demanding 10.3 million Euros in compensation, a Croatian Journalists’ Association (CJA) survey has revealed. The International and European Federations of Journalists (IFJ/EFJ) support their affiliate’s demands to urgently change the law to end the culture of harassing journalists and the media with lawsuits.

Using SLAPPs (Strategic Lawsuit Against Public Participation) is a widespread practice in Croatia. Their objective is to censor, intimidate and silence media workers by burdening them with court proceedings.

According to the CJA’s survey, at least 951 lawsuits were presented against journalists and media outlets in Croatia, in which plaintiffs are claiming almost 10.3 million euros. However, only 26 media were covered by the survey, so the actual number is likely much higher and exceeds 1000 lawsuits, the union warned.

The CJA noted with concern the fact that high-ranking state officials, local sheriffs, and even judges themselves are involved in filing lawsuits. Many of the lawsuits include the offense of ‘shaming’, which is still part of the Croatian Criminal Code.

Data from previous years show that very few journalists were eventually convicted, proving that many lawsuits were aimed at harassing and intimidating journalists over their reporting, not to win a case. According to the CJA, in only 11 cases was there a conviction against a journalist.

The wave of lawsuits also affects the CJA, with dozens of cases being presented against its representatives and members.

“What we are asking for, with no further delay, are changes in the legislation, in order to reduce the pressure of lawsuits. The CJA demands and insists that changes must be made in order to decriminalize all crimes against honor and reputation, which we have been proposing for years. We appeal to the Government to do so urgently,” said CJA’s president, Hrvoje Zovko.

The CJA consulted publishers’ representatives on solutions to reduce the massive amount of unjustified lawsuits against them and their workers.

IFJ General Secretary, Anthony Bellanger, said: “Having at least 951 lawsuits against journalists and the media reveals that the judicial persecution of journalists in Croatia is a serious problem that must be addressed without delay. A big majority of these lawsuits are legally unjustified, but aim to intimidate and drain the financial resources of media outlets and journalists. We support CJA’s call on the government to address this scourge urgently”.