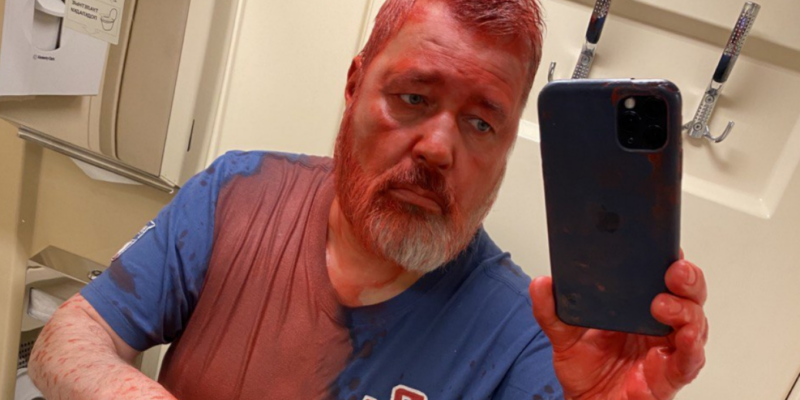 Novaya Gazeta’s editor-in-chief and Nobel Prize winner Dmitry Muratov was attacked in a train on Thursday 7 April 2022. Two people doused him with red paint mixed with acetone, injuring his eyes. The European and International Federations of Journalists (EFJ-IFJ) strongly condemned the attack.

The incident occurred in a train compartment at the Moscow railway station Kazansky:

“They poured oil paint with acetone in the compartment. Eyes burn terribly. Train Moscow-Samara. Oily smell all over the car. Departure has already been delayed by 30 minutes. I’ll try to wash off. He shouted: “Muratov, here’s to you for our boys,” said the editor-in-chief of Novaya Gazeta.

A statement claiming the responsibility for the attack published on the Telegram channel “Soyuz Z paratroopers” was deleted shortly afterward. According to Novaya Gazeta, “Union Z paratroopers” is a community in memory of Pavel Yakovlevich Popovskikh, the former head of the Interregional Public Organization of Veterans of the Airborne Forces and Special Forces. In 1998-2006, Popovskikh was brought to court in the case of the murder of Dmitry Kholodov, a journalist for Moskovsky Komsomolets. He was eventually acquitted.

Last night, the Ministry of Internal Affairs told TASS that police are looking for two men according to footage from the train station.

On 28 March 2022, Novaya Gazeta decided to suspend online and print operations until the end of the war in Ukraine after receiving a second warrant from Roskomnadzor, the Russian Federal Service for Supervision of Communications. Novaya Gazeta is one of the country’s most important independent publications.