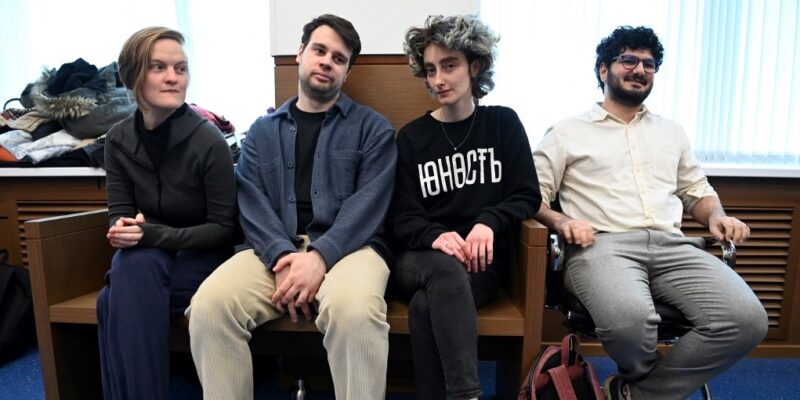 The Dorogomilovsky District Court in Moscow today has sentenced four journalists from a student magazine, DOXA, to two years of hard labour. According to the judge, they have called on young people to demonstrate against the Kremlin. They were arrested in April 2021 after a raid on the editorial office. The European Federation of Journalists (EFJ) denounced the eradication of press freedom in Russia and called for the immediate release of the journalists who were just doing their job.

On 14 April 2021, law enforcement officers in Moscow raided the office of the student-run magazine DOXA and the apartments four of its editors, Natalia Tyshkevich, Vladimir Metelkin, Alla Gutnikova and Armen Aramyan. Officers took the journalists to the Investigative Committee of the Russian Federation, where they were charged with “calling or otherwise involving minors into unlawful activities that might be dangerous”. The Basmanny District Court ordered Aramyan, Tyshkevich, Metelkin, and Gutnikova to be released and placed under home detention, with a ban on leaving their homes until their trial.

The independent news medium DOXA was founded five years ago by students and graduates of the Moscow Higher School of Economics. The magazine, which has since been blocked, focused on student life, educational news, politics and science.

The Investigative Committee officers told the journalists that their charges stemmed from a video DOXA published in January 2021, amid nationwide protests in support of opposition figure Alexei Navalny. The video, titled “They Can’t Defeat Youth,” expressed support for students who had been punished by their educational institutions for participating in rallies. DOXA later deleted the video by order of Russian state media regulator Roskomnadzor (RKN).

According to news reports, the video did not contain any calls to join the protests, but only expressed concern for those students.

The four reporters said they will appeal the verdict.

“We stand with Natalia, Vladimir, Alla and Armen,” said EFJ General Secretary Ricardo Gutiérrez. “The violence of this court decision demonstrates the determination of the Russian authorities to eradicate any independent voice in Russia, to impose a blanket on Russian civil society. We strongly condemn this ruling and demand the immediate release of the four journalists, who have only done their duty. The Putin regime will not defeat free and independent voices in Russia.”