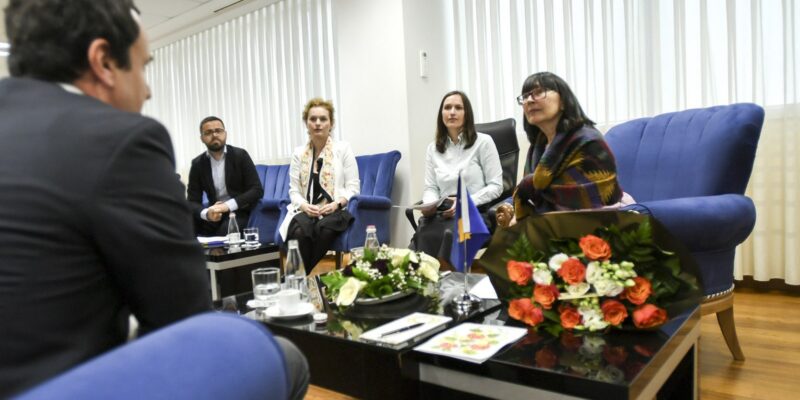 On Sunday, together with the government of Kosovo, the European Center for Press and Media Freedom (ECPMF), the European Federation of Journalists (EFJ) and its affiliates in Kosovo and Ukraine, AJK, NUJU and IMTUU, welcomed in Pristina Lyudmila Makey, first Ukrainian journalist to be hosted in Kosovo. She was forced to leave her country and will continue her journalistic work from Pristina. This initiative is part of the programme of sheltering Ukrainian journalists in exile launched on 1 March by the Kosovo government. The EFJ calls on other European governments to follow Kosovo’s example.

On 17 April, Albin Kurti, the Prime Minister of the Republic of Kosovo, welcomed in Pristina Ukrainian journalist in exile Lyudmila Makey, in the framework of the shelter programme launched by the government of Kosovo.

Prime Minister Kurti thanked the ECPMF, the EFJ and the Association of Journalists in Kosova (AJK) for the cooperation on setting up the Journalists-in-Residence Kosovo program.

“I am sincerely grateful to the ECPMF, the EFJ, the National Union of Journalists of Ukraine, the Association of Kosovo Journalists and the Government of Republic of Kosovo for the opportunity to seek refuge in your country under the Journalists-in-Residence Kosovo program, JiR Kosovo. For me, this is, first of all, an opportunity to remain in the important profession of a journalist”, said Lyudmila Makey.

“Unfortunately, it is dangerous to be a journalist in Ukraine today. Russian occupiers kidnap, threaten and kill journalists. Recently, NUJU published a list of killed media workers. It contains 21 names. They all told the truth about this bloody war”, Ms Makey added.

She stressed that she is impressed by Kosovar’s desire to support Ukrainian colleagues. “I am moved to tears by how complete strangers want to help Ukrainians,” she said, adding that she believes that this cooperation and journalistic solidarity is an important step towards peace.

“The National Union of Journalists of Ukraine is very thankful to Kosovo’s support for Ukrainian journalists,” today reacted Sergiy Tomilenko, President of NUJU. “Many Ukrainian refugees are looking for a safe place in Europe, including some journalists who are forced to go abroad. It is very important for media workers to maintain the opportunity to continue their professional activities. Therefore, the initiative by authorities of Kosovo for a special professional journalism program titled Journalist in Residence in Kosovo is an excellent project to protect independent and truthful journalism from brutal occupiers.”

“The Kosovo government’s offer is the best response to the Russian aggressor, who is trying to impose terror by targeting journalists in Ukraine and deploying unprecedented censorship in Russia,” added Ricardo Gutiérrez, EFJ General Secretary. “Ukrainian journalists must be allowed to continue to do their work, in order to inform world public opinion. The EFJ calls on other European governments to follow Kosovo’s example: offer refuge to threatened Ukrainian journalists to continue their work in exile. Do not let the Kremlin impose silence across borders. We warmly thank Kosovo for showing the way!”

Today @gervallaschwarz, @XSvecla & I welcomed Lyudmila Makey, 1st of 20 🇺🇦 journalists that 🇽🇰 will host. Forced to leave home b/c of the Russian invasion, she'll go on to tell & report the truth on behalf of her people from where I hope she'll soon call her 2nd home. Welcome! pic.twitter.com/9W9boRF2zj