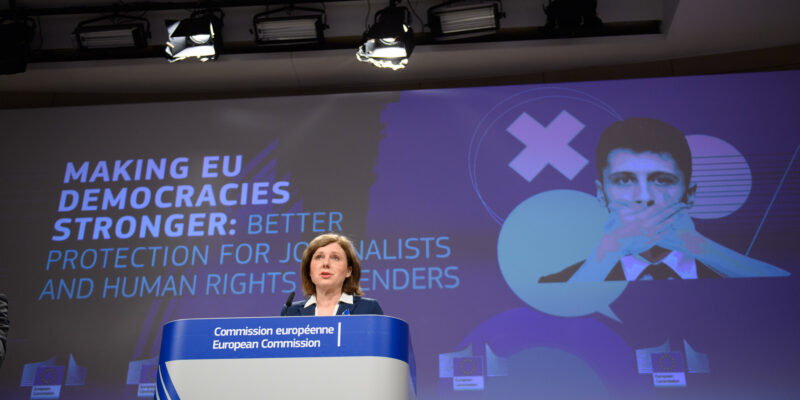 The European Commission today published two texts aimed at curbing the rise of strategic lawsuits against public participation (SLAPPs) in Europe. The European Federation of Journalists (EFJ) joined the partners of the Coalition Against SLAPPs in Europe (CASE) in welcoming a landmark step in the right direction. The EFJ urges the Member States to implement the recommendation without delay.

As part of the European Democracy Action Plan, the European Commission presented on 27 April 2022 a package including a proposal for a directive (binding) and a recommendation (non-binding) to the Member States to urge them to take action against the rise of abusive lawsuits against journalists and media outlets in the European Union.

“I made a promise to the family of Daphne Caruana Galizia, who had more than 40 SLAPPs to deal with at the time of her killing. We worked on this in the name of Daphne and I had a feeling that Daphne was working with us on that. There is a special moral imperative behind it,” said Vice-President Vera Jourova during a press conference.

Legal harassment is a growing practice in the European Union used to censor, intimidate and exhaust journalists and media outlets by burdening them with costly court proceedings. A CASE report published in March 2022 found a rising cumulative trend of SLAPPs in Europe since 2015.

Although the directive addresses only a certain type of SLAPP, it has a broad personal scope, addressing anybody who wants to hold power to account including journalists but also activists, trade unionists, human rights defenders, etc. It includes key safeguards and remedies, such as early dismissal mechanisms (along with reversal of burden of proof, stay of proceedings, accelerated proceedings), a regime of sanctions for harassers, and remedial and protective measures for victims (e.g. compensation of costs).

The recommendation sets out guidance for Member States on key aspects to effectively tackle SLAPPs, such as removing prison sentences for defamation, training of legal professionals and judiciary staff at all court levels, awareness raising activities and support mechanisms for victims. It also encourages data collection, reporting and monitoring of SLAPPs. The recommendation takes effect immediately.

EFJ General Secretary Ricardo Gutiérrez said: “This package is a first step towards recognition of SLAPPs and more protection for journalists and media who are increasingly harassed in courts. However, the safeguards must not be limited to cross-border SLAPPs as the vast majority of cases are purely national. We call on Member States to implement without delay the recommendation whose provisions are decisive to end SLAPPs in Europe. We also welcome the timely reminder of the decriminalisation of defamation, which we have long called for.”

The directive will be submitted to the European Parliament and Council of Ministers for amendments and adoption.