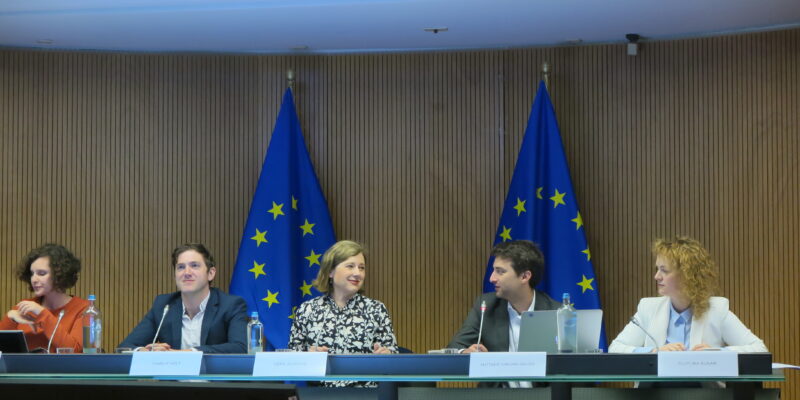 On Thursday 28 April, a press briefing was organised to present the Proposal for a Directive on strategic lawsuits against public participation (SLAPP) at the presence of Vice-President of the European Commission for Values and Transparency, Vera Jourova and the representatives of the Coalition Against SLAPPs in Europe (CASE).
The proposal, first of its kind announced on 27 April, is meant to tackle the growing problem of abusive litigation targeting journalists, activists and other public watchdogs across Europe.

Commenting on the need of the directive Vera Jourova, Vice-President of the European Commission for Values and Transparency said: “It is a David and Goliath fight. Yet, in democracy, the role of journalists and those that keep power in check is tremendous. The package that we propose today – a directive and a recommendation to Member States – will ensure that they can exercise this role.”

The CASE, a coalition of non-governmental organisations from across Europe united in recognition of the
threat posed to public watchdogs by Strategic Lawsuits Against Public Participation (SLAPPs), welcomes the European Commission’s anti-SLAPP initiative which includes key remedies and procedural safeguards needed in any effective anti-SLAPP legislation. The initiative, which focuses on cross-border cases, recognises that SLAPPs can impact all those who hold the powerful to account.

Civil society organisations are encouraged to see that the core components of CASE model directive as well as safeguards we have been advocating for over past years fed into the proposal: specifically, this includes an early dismissal mechanism, a regime of sanctions, and protective measures for those targeted by SLAPPs.

SLAPPs are on the rise, casting a shadow on the vital work of public watchdogs across Europe with a report published by CASE last month finding a rising cumulative trend in SLAPPs since 2015. We strongly support the Commission’s approach in defining SLAPPs with cross-border implications, which takes into account how attempts to limit public participation resonate and impact public interest across borders. We also welcome its recommendation that states ensure that safeguards be applied to all cases beyond the scope of these minimum EU standards.

Overall, the initiative sets minimum standards which are crucial for ensuring better protection of public watchdogs. The CASE strongly hopes that national decision makers will now truly commit to incorporating these proposed measures into domestic legal frameworks. We remain open to ongoing engagement with the Commission and member states on the implementation process. SLAPPs are abusive lawsuits that operate through the litigation process to silence critical speech, shut down accountability, and undermine democratic rights.

Matthew Caruana Galizia, Director of the Daphne Caruana Galizia Foundation said:  “Four years ago, a cross-party group of MEPs called on the Commission to protect people from the SLAPP harassment my mother was subjected to. Today, thanks to Vice President Jourová, Commissioner Reynders and their teams, that protection is close to becoming reality. The Commission’s proposal is the beginning of a new phase in our campaign as a family, and as members of the Coalition. We now need to focus on member states who need to implement the Commission’s measures as a minimum, to protect the public interest and to do justice to my mother’s sacrifice.”

Charlie Holt, Greenpeace International legal counsel said: “If these measures are interpreted and applied broadly enough to advance their stated purpose, the impact on civil society could be huge. SLAPPs will no longer be considered a viable means of silencing criticism in Europe. Public watchdogs will be given the space they need to hold power to account, regardless of where they are based. The main beneficiary of these measures isn’t therefore any single impacted group or community – it’s European democracy as a whole.”

Flutura Kusari, legal advisor at European Centre for Press and Media Freedom said: “This is a historical development. SLAPPs destroy careers. Today is the first step in creating serious obstacles to those hoping to use SLAPPs to censor journalists and to hide the truth. We are more motivated than ever to continue our fight against SLAPPs.”

Linda Ravo, senior advocacy advisor at Liberties and member of the EU expert group on SLAPPs said: “We are encouraged to see that the key safeguards and protection measures we have been advocating for have been taken on by the Commission in its proposed anti-SLAPP directive. This is a solid basis to build on for the Parliament and EU governments to work towards the strongest possible set of rules, making ambitious solutions work and addressing any potential loophole to make sure no SLAPP can proceed to trial, all victims effectively benefit from compensation, and courts start imposing dissuasive penalties to deter SLAPP litigants.”