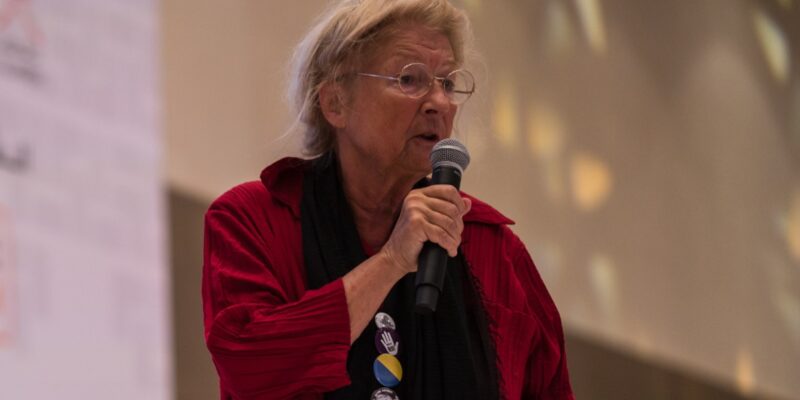 Dominique Pradalié from France, member of the National Union of Journalists (SNJ), was elected President of the International Federation of Journalists (IFJ) on 2 June 2022 at the 31st IFJ Congress in Muscat, Oman. After six years on the IFJ Executive Committee, Dominique Pradalié succeeds Younes Mjahed from Morocco. She was the only candidate. She received 193 votes in favour, 62 against and 11 abstentions.

Dominique Pradalié has worked throughout her career in French public broadcasting, from ORTF to France Télévisions, and she has been editor-in-chief of the nightly news on France 2.

At the same time as she was pursuing her career as a journalist, Dominique Pradalié was also involved in trade union activities on a voluntary basis. In particular, she has held various mandates to represent journalists within France Télévisions – staff delegate, member of the works council and union representative in the company.

Within the union, she was elected at regional (Ile de France section) and national levels as General Secretary and spokesperson of the SNJ until 2021, in charge of legal and international issues.

She currently sits on the SNJ National Committee, the union’s parliament, and has been a member of the IFJ Executive Committee since the Angers Congress (2016) after being re-elected at the Tunis Congress (2019).

She is a member of the Higher Commission of the Professional Journalists’ Identity Card (CCIJP) until 2021, and is currently deputy treasurer of the Council of Journalistic Ethics and Mediation (CDJM) and administrator of the Maison des lanceurs d’alerte in Paris, organisations of which the SNJ is a co-founder, and of several journalists’ defence associations. She is also an adviser to the Commission d’arbitrage des journalistes, a specific jurisdiction for the profession in France.

Since 1926, when the IFJ was founded in Paris, Dominique Pradalié is the second woman president of the IFJ, after the Belgian journalist Mia Doornaert (1986-1990).

She succeeds Moroccan journalist Younes Mjahed, who was IFJ President from 2019 to 2022. Her term runs until 2026, when the IFJ will celebrate its Centenary.

Ms Pradalié said: “Press freedom is under attack all over the world and journalists are the first victims. But it is the citizens who are the most penalised, because democracies are judged by the quality of their media and information, which must be honest, complete, independent and pluralist”.

Ms Pradalié also pointed out that the IFJ Convention against Impunity for Journalist Killers should be adopted by the UN General Assembly: “Solidarity and collective action must be multiplied everywhere to promote and remember the mission and role of journalists in society”.

Three other candidates from European journalists’ unions were elected to the IFJ Executive Committee: