UK: Home Office minister approves extradition of Assange to the US 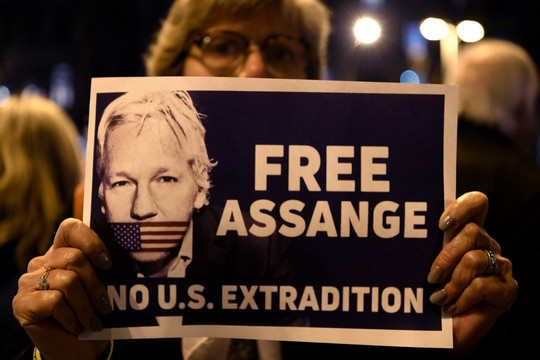 UK Home Secretary Priti Patel has accepted the US government’s request to extradite Wikileaks publisher Julian Assange in what the International and European Federations of Journalists (IFJ/EFJ) condemned as a shameful decision that sets “a terrible precedent for all those who are daily fighting to tell the truth”.

On 17 June, despite theIFJ and media calling on the government to reject the extradition request, the Home Secretary gave the green light, ignoring pleas to protect media freedom.

Assange is currently fighting extradition to the US to face charges, mostly under the Espionage Act, relating to the leaking and publishing of the Afghan and Iraqi war logs.

In the US, Julian Assange would face trial on 17 counts under the Espionage Act and one count under the Computer Fraud and Abuse Act, which combined could see him imprisoned for up to 175 years. He is highly likely to be detained there in conditions of isolation or solitary confinement, despite the US government’s assurances, which would severely exacerbate his risk of suicide.

Assange has already been held in Belmarsh prison in the UK for over three years, despite the risks posed to his mental and physical health.

In March, the Supreme Court refused to consider Assange’s appeal against the High Court decision, which overturned the District Court ruling barring extradition on mental health grounds. The case then recently passed to the Home Secretary.

The IFJ and EFJ are concerned that the decision sets a dangerous precedent that could be applied to any media outlet that publishes stories based on leaked information, or any journalist, publisher or source anywhere in the world.

The IFJ has also denounced the lack of proper justice in the future legal process that could take place as Mr Assange would be unable to adequately defend himself in the US courts, as the Espionage Act lacks a public interest defence.

“This decision, which shames the British government, will make the autocrats and the enemies of press freedom happy. It calls into question the freedom of journalists to hold powerful states to account. It will be enough for them to accuse journalists who expose war crimes or corruption of being spies to get them extradited. This is a real scandal,” said EFJ President Maja Sever.

IFJ President Dominique Pradalié said: “The decision of the UK Home Secretary to allow the extradition of Julian Assange is vindictive and a real blow to media freedom. Assange has simply exposed issues that were in the public interest and the failure of Priti Patel to acknowledge this is shameful and sets a terrible precedent for all those who are daily fighting to tell the truth. Our hope now lies in a successful appeal against this decision. All journalists must support Julian Assange, who enabled them to reveal US army war crimes in Iraq and Afghanistan”.