Belgium: journalists acquitted for stalking and breach of privacy in SLAPP-case 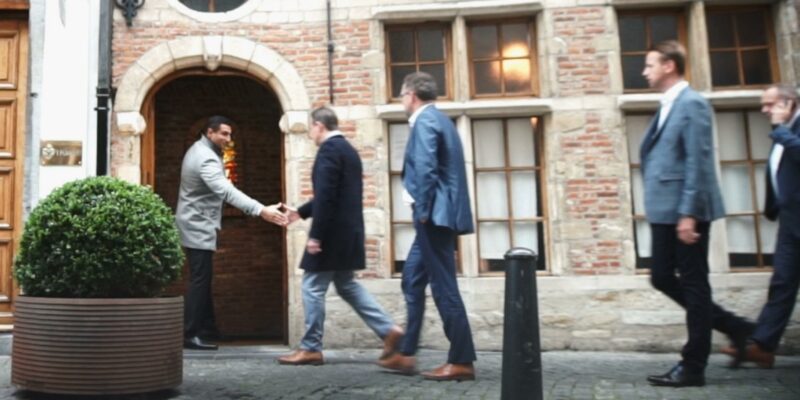 Update (30 June 2022): On 30 June 2022, we were informed by the author of this blog that the plaintiff/civil party has lodged an appeal with the Supreme Court (Court of Cassation) against the Antwerp CA judgment of 9 June 2022.

This article was previously published by the “Leuven Blog for Public Law”. It is reproduced with the permission of the author, Dirk Voorhoof, who is emeritus professor at the Human Rights Centre UGent, founding member of the Legal Human Academy and member of the expert committee of the Council of Europe on SLAPPs (MSI-SLP).

When Belgian news site Apache‘s chief editor Karl van den Broeck and its journalist Stef Arends were acquitted on 20 January 2021 for stalking and invasion of privacy in the so-called Fornuis case, the tribunal’s verdict was considered a boost for journalistic freedom and investigative reporting. The Antwerp Court of Appeal’s judgment of 9 June 2022 (condemning the civil party for abuse of process) confirms strong support for investigative journalism on issues of public interest, while at the same time acknowledging the detrimental impact of SLAPPs (Strategic Litigation Against Public Participation). This criminal case against Apache initiated by business man Erik Van der Paal is a timely illustration of the need to combat abuse of litigation against journalists, media, civil society organisations, academics or other public watchdogs.

The case concerns a complaint by project developer Erik Van der Paal against  news site Apache‘s chief editor Karl van den Broeck and journalist Stef Arends. They were accused of having stalked Erik Van der Paal of the NV Land Invest Group (Section 442bis Criminal Code) and of violating the Personal Data Processing Act (Privacy Act). Van der Paal also alleged a violation of his right to his own image (portrait right) and an infringement of the presumption of innocence. He started these criminal proceedings because Stef Arends had used a hidden camera to make images of Van der Paal welcoming a number of guests to his birthday party in ‘t Fornuis, a well-known top restaurant in Antwerp. The images were made secretly from the public road and were published on the Apache website as an illustration of the close and friendly relationship between the building promoter and members of the Antwerp city council.

After Apache’s acquittal in January 2021, Van der Paal lodged an appeal. The Court of Appeal’s ruling has now landed like a boomerang on Van der Paal. The Court validated Apache’s counter claim arguing that the lodging of an appeal in this case constituted an abuse of process. The judgment makes it clear that, with this and other legal actions against (journalists of) Apache (e.g. here and here) Van der Paal did not act as a prudent and careful person, but essentially had the intention of (financially) exhausting Apache and stopping their critical reporting about him.

Apache remained within the limits of the freedom of the press

The fact that Apache was acquitted for making and publishing the Fornuis video, is certainly no surprise. The criminal tribunal had already made this abundantly clear in the judgment of 20 January 2021, and now the Court of Appeal has similarly explained this in an even more convincing manner. In short: the (surreptitious) making of the images and their processing and integration in the reporting on Apache formed part of responsible journalistic reporting on a topic of social importance, namely the critical reporting on a series of real estate projects linked to Land Invest Group NV and its relations with the Antwerp city authorities.

Moreover, the judgment makes it clear that Van der Paal’s peace and quiet were not seriously disturbed (hence: no stalking) and that there was no unfair or unlawful processing of his personal data by Arends or Apache (so no infringement of the Privacy Act either). The violation of his portrait right and infringement of the presumption of innocence brought forward by Van der Paal were also firmly rejected by the Court of Appeal. The judgment emphasises that the Fornuis video constituted part of Apache’s journalistic activities and was justified “within the limits and possibilities that the freedom of the press offers in the interest of a democratic society”.

When Van der Paal (as a plaintiff and civil party) lodged an appeal in January 2021, Apache’s lawyers immediately lodged an ‘incidental appeal’. This is a legal remedy in a criminal case that can be used by an accused party. In this case it was argued that the person lodging the appeal after the accused’s acquittal in the first instance was abusing his right to lodge an appeal. Apache’s chief editor and journalist each demanded 5,000 euros in damages for the abusive and reckless lodging of the appeal by Van der Paal as well as an increased share of court fees as (partial) compensation for the lawyers’ costs.

However, in media cases, such forms of counterclaim or incidental appeal are very rarely granted by the courts because the vexatious, reckless or abusive character of legal proceedings is hard to determine or to prove. Difficult but not impossible. Most recently, on 9 December 2021, in the case of Willem Engel against Marc Van Ranst the criminal tribunal in Mechelen judged the direct summons by Engel for allegedly defamatory statements by Van Ranst to be vexatious and reckless. The criticism that medical expert Van Ranst in a TV-interview had levelled at the founder of the Dutch organisation Viruswaanzin (Virus madness) was manifestly not defamatory. Moreover, Engel showed bad faith when instituting legal proceedings against Van Ranst. The incidental appeal by Apache is somewhat different however, as it submitted that there was abuse of process at the level of the appeal proceedings specifically. Apache argued that the lodging of an appeal was a SLAPP: after the judgment of 20 January 2021 acquitting Apache, it was sufficiently clear that the complaint lodged by Van der Paal as a civil party against Apache’s chief editor and journalist (as referred party) did not stand a chance and that Van der Paal was therefore abusing the appeal proceedings.

The judgment addresses this counterclaim by Apache. A few passages from the judgment make clear the principles in play and why Van der Paal was reprimanded by the Court of Appeal and ordered to pay the requested damages of 10,000 euros:

“A civil party’s appeal against an acquittal may be of a vexatious and reckless nature if that party intends to cause prejudice to the referred party or if it exercises or continues to exercise its right to exercise this remedy without reasonable or sufficient interest or in a manner which manifestly exceeds the limits of the normal exercise of it by a prudent and careful person. The court shall decide, without prejudice, on the basis of all the circumstances of the case, whether there has been an abuse of process”.

“From the reading of these elements it follows, in the opinion of the Court of Appeal, that Erik Van der Paal is exercising his right of appeal in a manner that evidently exceeds the limits of the normal exercise thereof by a prudent and careful person. From the chronology of mainly legal proceedings initiated by Van der Paal against the news site Apache, its chief editor Karl Van den Broeck and journalists such as Stef Arends, and from the above-mentioned elements that characterise Erik Van der Paal’s appeal, it follows that lodging an appeal in the present case is not aimed at a final settlement of a limited (legal) dispute between the parties, as may be expected from a cautious and careful person, but rather that instituting the legal remedy must be seen as yet another procedure against essentially Apache and its chief editor Karl Van den Broeck, with the intention of (financially) appeasing both the news site and its chief editor to such an extent that further reporting that Erik Van der Paal considers unpleasant would be stopped”.

“Erik Van der Paal’s defence that his claim is not insignificant in view of the referral of both parties to the criminal court after his complaint with a civil action, does not detract from the above. There is nothing to prevent a litigant, who may originally have commenced proceedings that are neither vexatious nor reckless, from adopting an attitude in the course of the proceedings that can be regarded as vexatious or reckless. The reference does not concern the conduct of the civil party throughout the proceedings: it concerns only the use of the appeal”.

“The court recognises that, as a result of the introduction of the appeal in the outlined circumstances, the defendants have suffered material damage because of the hindrance of their professional activities, as well as moral damage because the defendants remained uncertain about the final decision and because their professional functioning, including their good name, was wrongfully attacked again”.

Apache’s chief editor and the journalist were also awarded an increased compensation for legal costs of 6,000 euros as a form of fixed contribution towards the costs and fees of their lawyers (Mr Paul Maeyaert and Mr. Caro Van Wichelen/Fencer), with reference to, among other things, Van der Paal’s abusive conduct:

“The Court of Appeal is of the opinion that as a result of the outlined procedural conduct of Erik Van der Paal in the appeal proceedings in the present case, there is a manifestly unreasonable situation that gives cause to an increase of the procedural indemnity”.

It is clear that the compensation combined with the court costs totalling 16,000 euros represent only a fraction of the costs incurred by Apache in this case and of the damage that Apache has suffered as a result of this criminal case. Yet at the same time, the conviction for Van der Paal’s unreasonable and abusive procedural conduct is an important signal that the judiciary takes such abuse of legal procedures seriously and is prepared to protect journalists or media that report responsibly on matters of social importance against SLAPPs. The judgment is also a perfect occasion to draw attention to and put a stop to the increasing abuse of legal procedures against media, journalists, civil society organisations and academics participating in public debate (see here, here and here).

Recently, the European Commission has also encouraged EU Member States to take a set of initiatives in this area, by means of its Recommendation “on protecting journalists and human rights defenders who engage in public participation from manifestly unfounded or abusive court proceedings (“strategic litigation against public participation”)”. This EU Recommendation was published in the Official Journal of the EU on 17 May 2022, together with a proposal for an anti-SLAPP Directive (see here, here and here).

This text is an adaptation of the Dutch version, published on https://www.apache.be/2022/06/10/apache-opnieuw-vrijgesproken-fornuis-zaak.