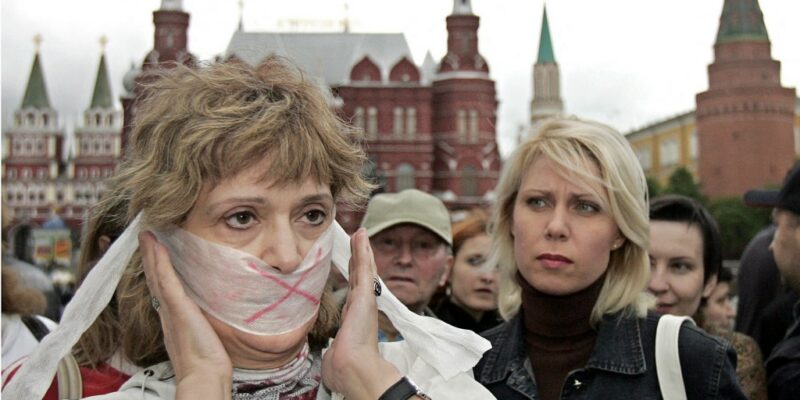 A woman wears a bandage during a protest against the State control of mass media in Russia near the Kremlin in Moscow. Credit: Denis Sinyakov / AFP.

After a series of British journalists, Russia has banned, on Monday morning, the Danish public television correspondent in Moscow, Matilde Kimer. The European and International Federations of Journalists (EFJ-IFJ) call for the reversal of these decisions.

On the morning of 1 August, on arrival at Moscow’s Vnukovo airport, Matilde Kimer had passed through passport control but was arrested after collecting her luggage. At an airport office, she was handed a document stating that she was denied entry to the Russian Federation “for security and defence reasons” and should therefore be deported immediately. After a five-hour wait at the airport in Moscow, Matilde Kimer was escorted on board a flight to Istanbul.

The ban is imposed for a period of ten years. This means that it is not possible for Matilde Kimer, who has covered Russia for the past 13 years, to travel to Russia before 2032.

“The Danish Union of Journalists protests against the Russian authorities’ rejection of Matilde Kimer’s entry into Russia and the subsequent deportation,” reacted Allan Boye Thulstrup, Danish member of the EFJ Steering Committee. “It is highly objectionable that the Russian authorities prevent freedom of the press and freedom of expression. It is an obvious violation of the rights that citizens in general and journalists in particular should be entitled to in a civilized, democratic society.”

Matilde Kimer is the latest foreign journalist to be expelled from Russia. But she is not the only one to have had her access restricted in Russia.

In a statement released on 14 June, Russia’s foreign ministry announced that 29 British journalists, including editors at the BBC, Times, Daily Mail and Guardian, will no longer be permitted into Russia. A further 12 British journalists were added to the list on 1 August, chosen because, the Russian government said, they “contribute to London’s hostile course aimed at the demonisation of our country and its international isolation”. The National Union of Journalists (NUJ) condemned this “deliberate move to stifle press freedom and curtail accurate reporting about events in Russia.”