The EFJ condemns the arrest of Russian journalist Marina Ovsiannikova 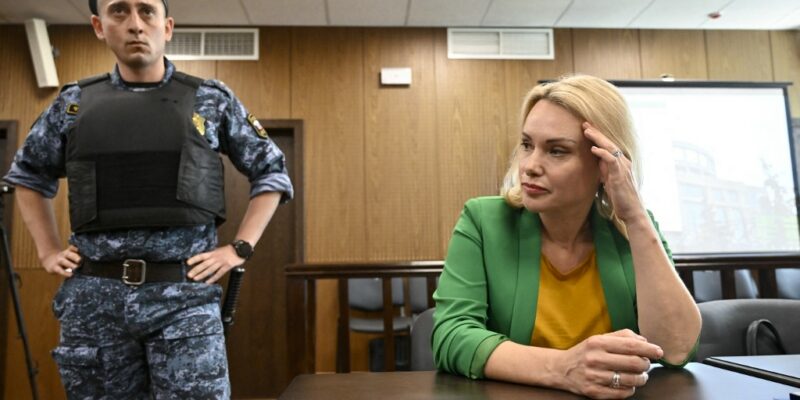 Russian journalist Marina Ovsiannikova was officially charged with “spreading false information” about the army on Wednesday 10 August. She was arrested today and will spend the night in pre-trial detention in Moscow. She faces “up to ten years in prison” under a new article of the Russian Criminal Code, introduced after the start of the war in Ukraine. The European Federation of Journalists (EFJ) condemned the judicial harassment of the journalist and demanded her immediate release.

Marina Ovsiannikova is famous for interrupting a Russian state TV news programme and has already received two administrative fines for her anti-war stance in Ukraine. She is now facing criminal charges.

The former journalist of Russia’s first public television channel had spent three months working for the daily Die Welt in Germany before returning to Moscow at the beginning of July.

Marina Ovsiannikova was arrested on Wednesday morning at her Moscow home, which was searched at 6am by ten investigative committee officers, who seized several phones and a computer. The Russian authorities are blaming her for a demonstration in front of the Kremlin on 15 July, during which she accused Vladimir Putin of being a “murderer”. She also mentioned the dead children in Ukraine. “More than 350 dead children in Ukraine, are they fake?” she maintained. “How many more children have to die for you to stop?”

“We strongly condemn the judicial harassment of Marina Ovsiannikova and all Russian citizens who dare to speak the truth about the war in Ukraine,” said EFJ President Maja Sever. “The EFJ denounces the regime of censorship and repression that is creating terror in Russia. We demand the immediate release of the journalist and the thousands of citizens persecuted for peacefully exercising their right to freedom of expression.”

The Russian NGO OVD-Info has already documented more than 16,000 arrests of Russian citizens, since 24 February, for simply showing their opposition to the war in Ukraine. According to the Net Freedoms Project, Russian authorities have launched 79 criminal cases on charges of spreading alleged “fake news” about the military, as well as a further 4,000 administrative cases.