Increased support to journalists in Ukraine 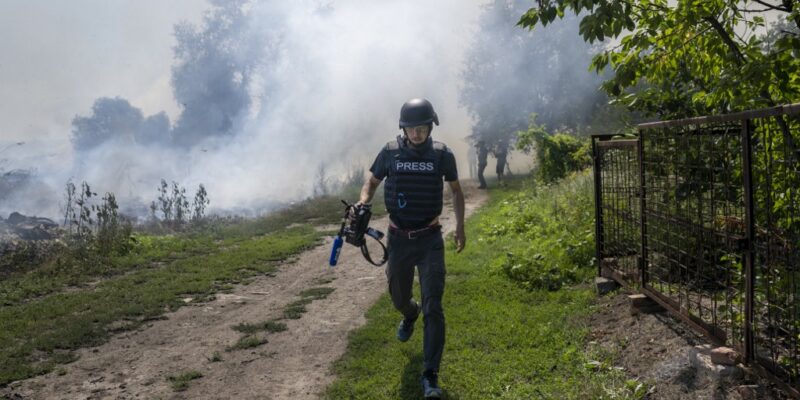 An AFP journalist runs as smoke rises behind after a bombardment in Bakhmut, Eastern Ukraine, on July 31, 2022. Credit: Bulent Kilic / AFP.

The newly elected Steering Committee of the European Federation of Journalists (EFJ) was keen to organise an online meeting with the leaders and members of the National Union of Journalists of Ukraine (NUJU). The two organisations discussed the programme of support for Ukrainian journalists and its future developments.

The EFJ will focus its efforts on ensuring that assistance to Ukrainian journalists has long-term sustainable results. This is one of the main conclusions of the online meeting organised by NUJU, with the participation of Maja Sever, EFJ President, Ricardo Gutiérrez, EFJ General Secretary, Sergiy Tomilenko, NUJU President, Lina Kushch, First Secretary of NUJU and several members of the Steering Committee of the EFJ (Andrea Roth, Anna Del Freo, Pablo Aiquel, Marta Barcenilla, Allan Boye Thulstrup, Tim Dawson) and several secretaries of NUJU.

The leaders of the EFJ were informed about the results of the centers’ work, as well as the main needs of Ukrainian journalists. As of August 1, the network of the Journalists’ Solidarity Centers is expanding to five. Two additional centers are opening: a joint Eastern-Ukrainian center with teams in Zaporizhzhia and Dnipro, as well as a center in Kyiv. This will make it possible to help journalists close to the front line and effectively coordinate all forms of support. This format of work is new for Ukraine and has fully justified itself during the previous three months.

Sergiy Tomilenko thanked the EFJ for its solidarity with the Ukrainian colleagues and the comprehensive support of journalists.

The participants to the meeting decided:

“The conversation that took place proved that the problems of Ukrainian journalists are much bigger than we imagined,” said EFJ President Maja Sever. “I am convinced that we have to make efforts to keep independent media so that they can survive. Such meetings should be continued to strengthen cooperation. At the same time, the meeting convinced me once again that we are on the side of truth. Despite the difficult times, during the war, you have the strength, love, and courage to fight for the truth”.