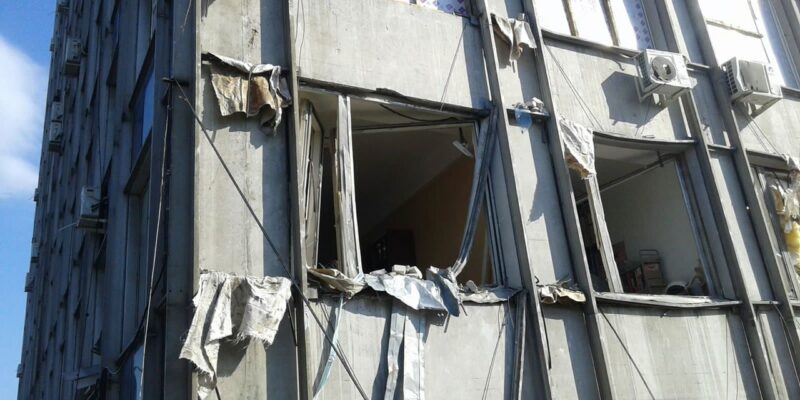 The building housing the offices of the National Union of Journalists of Ukraine (NUJU), as well as media outlets and printing houses, in Kharkiv in northeast Ukraine, may collapse due to the damage caused following a Russian missile strike. The International and European Federations of Journalists (IFJ-EFJ) denounced the attack and expressed their support to the Kharkiv NUJU branch and the workers who are no longer able to continue their work.

According to NUJU, an IFJ/EFJ affiliate, several weeks were needed to carry out checks and precise damage control following the rocket attack, which took place at night on 31 July 2022. No injuries were reported among the union staff and journalists who were not present in the building at the time of the shelling.

Although it is still not possible to access the premises for security reasons, experts have stated that the building may collapse at any moment. Photographs show total destruction of the Kharkiv NUJU branch’s property. Staff and union members in Kharkiv are left without a place to meet and discuss professional issues for an indefinite period.

Sergiy Tomilenko, president of the NUJU, said: “We condemn the crimes of the Russian occupiers against journalists. At the same time, we admire the courage of the Kharkiv reporters who continue to work. It is thanks to the help of international organisations, including the IFJ and EFJ, that we managed to give them flak jackets, helmets and IFAK first aid kits. At the moment, all types of personal protection are still very important for journalists working in the hot spots of Ukraine”.

“We are in solidarity with Kharkiv NUJU`s staff and members and we will do everything we can to continue supporting our colleagues as the war continues, unfortunately causing more casualties and material damage every day. We thank again Ukrainian journalists and NUJU for the important work they have done under incredibly difficult conditions for the past six months,” said EFJ President Maja Sever.

” The targeting of media premises is a war crime that Russia will be held accountable for. We express our deep support to our colleagues in Kharkiv and our affiliate NUJU and urge Russian authorities to let journalists report safely and freely”, said IFJ President Dominique Pradalie.

Donate to the IFJ/EFJ Safety Fund for Journalists in Ukraine