Russia: Ivan Safronov has been sentenced to 22 years in jail 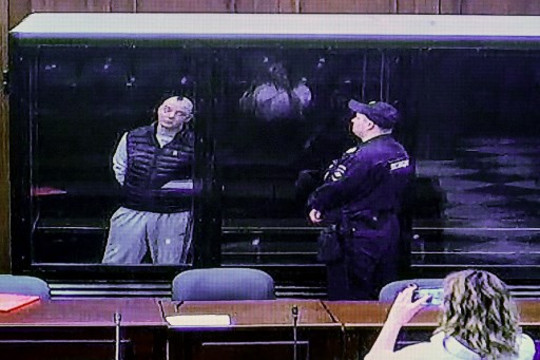 A screen set up at a courtroom of the Moscow City Court shows live feed of the verdict in the state treason trial of former reporter Ivan Safronov, in Moscow on September 5, 2022. Credit: Natalia Kolesnikova / AFP

Former Russian journalist Ivan Safronov who has been imprisoned for alleged “high treason” since 7 July 2020, was sentenced to a 22-year jail term on 5 September. The International and European Federations of Journalists (IFJ-EFJ) joins their affiliate the Journalists and Media Workers Union (JMWU) in strongly condemning the decision of the Moscow City Court.

Ivan Safronov was a prominent journalist reporting until May 2020 on defence issues for Russian newspapers Kommersant and Vedomosti, before becoming an adviser for the Russian space agency Roscosmos.

Safronov is accused of “high treason” for allegedly providing state secrets related to arms sales to the Czech Republic, which he denies. Since his arrest, the authorities have failed to clarify the specific evidence against him. On 5th September the Moscow City Court sentenced him to a 22-year jail term.

According to his lawyers, Safronov is being persecuted for his previous journalistic work.

Safronov is accused of collecting confidential information about Russia’s military, defence and security. His defence argued that all of the information was publicly available and therefore nothing constituted high treason.

According to media reports, the prosecutors offered Safronov a 12-year period in jail if he confessed to the charges which he refused.

JMWU office secretary Andrei Jvirblis said: “The harassment of Safronov is nothing more than personal revenge by the secret services for his embarrassing articles in Kommersant and Vedomosti and an act of intimidation against the entire Russian journalistic community, which is already subject to severe censorship”.

IFJ Secretary General, Anthony Bellanger said: “Ivan Safronov wrote about stories that made the government uncomfortable. This trial reminds us of the difficulty of being a journalist in Russia and of the deteriorating state of press freedom in the country. We urge the Russian authorities to release Safronov who is another victim of the government’s crackdown on media and press freedom”.

EFJ General Secretary Ricardo Gutiérrez added: “This decision is of course politically motivated. Ivan has already spent two years behind bars, two years too many. His journalistic work was too powerful for the Russian authorities: this is the message we have to send to the rest of the world.”