MFRR Monitoring Report: 311 media freedom violations recorded in first half of 2022 in Europe 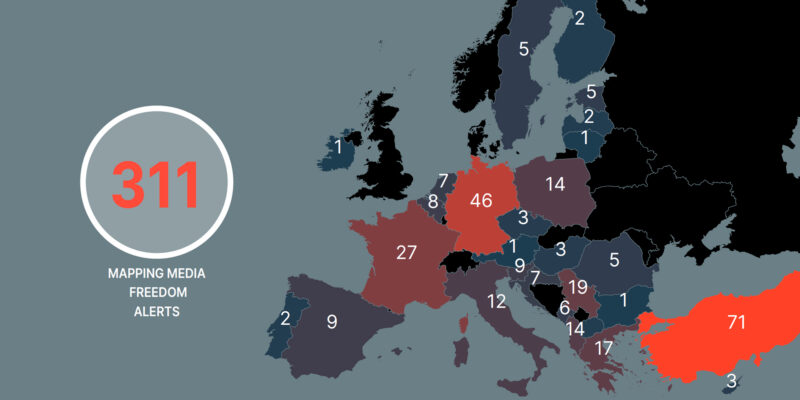 
Amidst the unprecedented attack on democratic freedoms in Ukraine, serious violations of media freedom have continued to take place all over Europe in the first six months of 2022, according to a report published today by the Media Freedom Rapid Response (MFRR). The report was compiled by the European Federation of Journalists (EFJ), the International Press Institute (IPI) and the European Centre for Press and Media Freedom (ECPMF).

The MFRR monitoring report – available to download – documents violations and attacks on media freedom across European Union Member States and Candidate Countries between January and June 2022.

It illustrates the increasing threats to journalists across the region and highlights the multiple forms of pressure facing independent journalism, from physical attacks and surveillance to abusive lawsuits and government interference.

In the first six months of 2022, the MFRR documented 311 media freedom violations involving 552 individuals or media entities in 29 different countries.

Verbal attacks, including harassment and threats were the most common types of violations (39.2%), followed by legal incidents (30.9%).

Physical attacks accounted for 19.3% of cases, although these were often the most serious, including the murder of Güngör Arslan, managing editor of the Turkish newspaper Ses Kocaeli.

Attacks to property made up 14.2% of alerts, and 12.9% of alerts were linked to censorship, such as blocked access to information.

The alerts for this report can be accessed through the Alert Explorer, which is constantly updated and collects and visualises all alerts documented by the monitoring partners.

As Ukraine and Moldova became candidate countries on 23 June, alerts from these states are not included in the six-month analysis. However, Ukraine was monitored from the beginning of the invasion in February and it is explained in a dedicated chapter of the report.