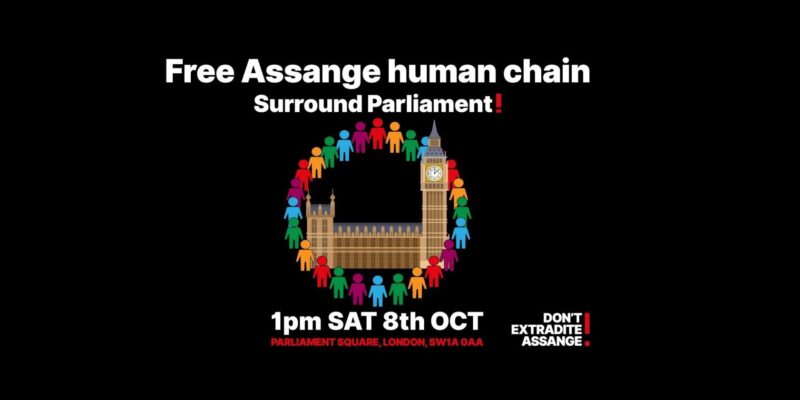 On October 8th, at 1PM a human chain will surround the Houses of Parliament in London, UK, to oppose the extradition of Julian Assange, the founder of Wikileaks, and urge the US government to drop all charges against him. The European and International Federations of Journalists (EFJ-IFJ) call on journalists unions, press freedom organisations and journalists to mobilise and express their solidarity.

More than 3.600 people will form a human chain to demand Assange’s freedom. Members of the IFJ and EFJ affiliated union in the UK, the National Union of Journalists (NUJ), will join the rally. “Criminalising investigative journalism enables every other kind of repression. If enough of us come together to surround Parliament in a few weeks, that process can be stopped in its tracks,” reads an NUJ statement published for the occasion.

Join us this Saturday 8 October, as #NUJ members and others form a human chain around Parliament, standing up for free speech and opposing the extradition of Julian Assange. #FreeAssange pic.twitter.com/puvuzwMUra

The protest around the British Parliament, organised by the Don’t Extradite Assange campaign, will create a vast visual symbol of the people’s determination to protect freedom of expression. On the same day, actions of solidarity with the founder of WikiLeaks are planned around the world.

In France, a gathering to oppose Assange’s extradition and defend press freedom will be organised by the Assange Support Committee and the 37 organisations that signed the ‘Paris Appeal for Julian Assange’, including our French affiliates, Syndicat National des Journalistes CGT (SNJ-CGT) and Syndicat National des Journalistes (SNJ). Journalists, trade unionists and association leaders will meet at the Statue de la Liberté, Ile Aux Cygnes, in the 15th arrondissement of Paris, at 2PM.

In the United States, the Assange Defense Committee will hold a rally at the Department of Justice in Washington DC, calling on Attorney General Merrick Garland to drop the charges against Assange at 12PM. Other rallies will be organised across the US.

In Australia, Assange’s home country, several actions are planned, including the formation of a human chain starting at Princes Bridge, Southbank, in Melbourne at 11AM.

In addition, more than twenty actions will take place around the globe to demand Assange’s release, from a human chain surrounding the Parliament in Wellington, New Zealand, to a march that will go from the UK embassy to the US embassy in Mexico DF.

The IFJ is gravely concerned about the impact of Assange’s continued detention on media freedom and the rights of all journalists globally. It has launched a global campaign calling on the US government to drop all charges against him and asking all media unions and press freedom organisations to urge their governments to secure Assange’s release. Irrespective of personal views, his extradition will have a chilling effect, with all journalists and media workers at risk.

IFJ President Dominique Pradalié said: “The decision of the UK Home Secretary to allow the extradition of Julian Assange was vindictive and a real blow to media freedom. All journalists must support Julian Assange, who enabled them to reveal US army war crimes in Iraq and Afghanistan. October 8 is the time to mobilise and express solidarity to defend Assange’s freedom as well as everyone’s right to know”.

“The US case against Julian Assange could be brought against any journalist in the world on the same basis. We cannot stand by and watch this gross abuse of power. It is not Assange, but free and independent journalism that is threatened by this extradition process,” said EFJ President Maja Sever.