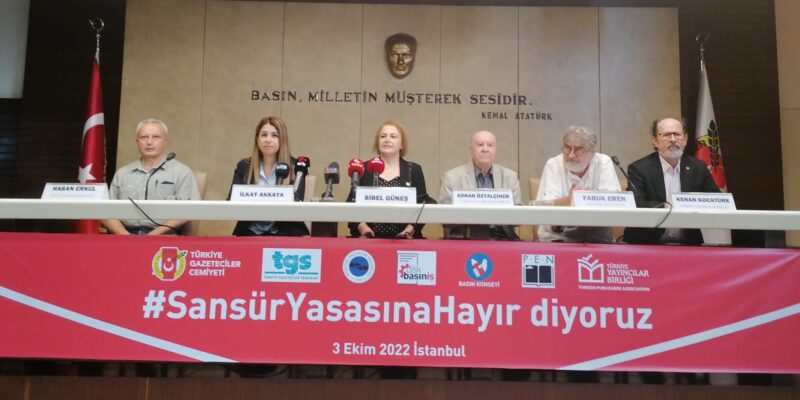 
The European and International Federations of Journalists (EFJ-IFJ) call on the Turkish government to immediately dismiss the “disinformation law”, expected to be turned into law by the end of the week.

The law was submitted to the parliament on May 27 by the governing alliance of Justice and Development Party (AKP), President Recep Tayyip Erdogan‘s Islamic party, and Nationalist Movement Party (MHP), their ultra-nationalist allies. The draft will be presented at the Parliament General Assembly this week, and is expected to be voted on and passed promptly after.

Such a bill, giving very vague definitions of “disinformation” and “intent”, would, if implemented, enable the government to fund pro-government news sites while banning critical media deemed to have breached the disinformation law. It risks increasing the crackdown on journalists and journalism in the country, adding yet another measure restricting press freedom.

The bill includes amendments to the Press Law (Basin Kanunu), which in its current form is already an important threat to freedom of expression. Along with 40 clauses amending press and media laws, one of the most worrying change proposed is a prison sentence to punish “fake news” and “disinformation”: social media networks and internet sites would be forced to hand over details of users presumed to have publicly spread “misleading information”, which would become a new crime in the Turkish legal system, and journalists could face up to three years in prison for sharing information outside the scope of the party in place’s rules. Opposition media and activists would therefore see their activities threatened, and a wave of self-censorship could be seen across the Internet.

The bill follows a series of steps put in place during President Erdogan’s two decades in power. It comes at a time when the President is facing his most challenging election ever, with the ruling party’s approval ratings ahead of the June’s elections at the lowest level they have ever been at, in a context of whopping inflation.

“We are making a regulation on disinformation. Blocking or restriction of social media is out of the question. The AK Party is a party that fights against censorship and bans,” said AKP’s lawmaker Huseyin Yayman when replying to critics arguing that the bill puts millions of Turkey’s internet users at risk of criminal action for posting information that the government disagrees with. The ruling party claims that the bill is in line with the European Union’s Digital Services Act and General Data Protection Regulation, however no such provisions exist.

On 4 October 2022, 10 organisations of journalists of press associations (including the EFJ and IFJ affiliates TGS, TGC and DISK Basin-Is), forming the Media Solidarity Group (MSG), held a press conference in front of the parliament.

“We, the journalists, are warning both the lawmakers and the public once again as part of our responsibility to society,” 10 journalist organisations said in a joint statement given outside parliament in Ankara. “If this law is implemented in its current form, the freedom of press, expression and communication in our country will be brought under great pressure and siege.”

Once more, the EFJ and IFJ call on all Turkey’s parliamentarians who believe in the parliamentary process and the free flow of ideas and information as central to a democratic society to vote down this bill.