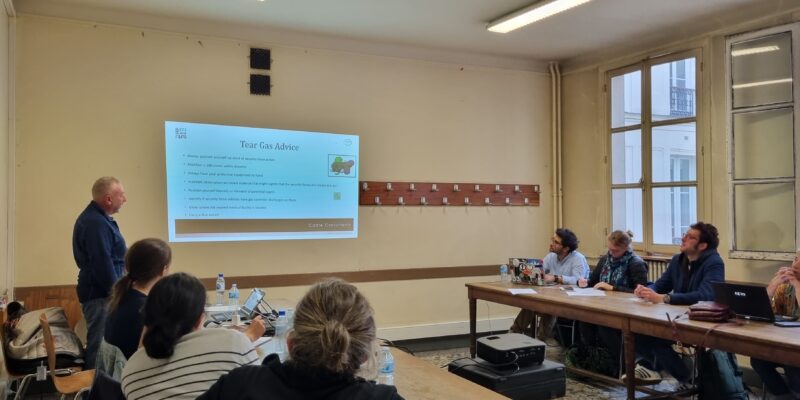 
Thirteen journalists and representatives from journalists’ unions in France took part in a training workshop on the safe coverage of demonstrations and civil unrest, on 10-11 October 2022 in Paris. The workshop is part of a series of training sessions organised by the European Federation of Journalists (EFJ) in the framework of the Safety4Journalists project.

The workshop was organised in cooperation with the French journalists’ trade union SNJ-CGT. Six female journalists and seven male journalists attended the sessions. All are working as camera operators and photographers, and are from different cities of France, including Lyon, Bordeaux, Besançon, Nice and Paris. The training focused on covering protests safely and carrying risk assessments prior to field assignments in France.

It came as a response to the increasing attacks journalists are facing in France, and had the goal of equipping them with practical safety skills. In the last six months alone, 27 attacks involving 41 journalists were recorded according to the Media Freedom Rapid Response (MFRR).

The Paris workshop, led by EFJ trainer David Bevan, was focusing on how to cover demonstrations and situations of civil unrest as a media worker. It also provided the opportunity for the participants to share their experiences on the threats and attacks they face when working. Prevention techniques, risk anticipation, and how to best react and report the news when facing a hostile crowd were the main points of the course. Practical exercises were also included, for instance how to complete risk assessments identifying the threats and deploying contingency measures to be put in place in order to minimise the risks.

One participant said the training was “an eye-opener as well as a wake-up call”: “I used to cover demonstrations without properly thinking about what may happen to me during violent events. I always trusted my instinct but as we are increasingly becoming targets, the training was useful to reconsider my routine. Doing risk assessment is a vital part of it.”

In addition to the training workshop, the EFJ and the SNJ-CGT will launch a working group with the participants and members of other organisations to discuss further actions to develop a national safety culture in France.

“We have obtained a victory with the review of the National Policing Plan (SNMO) and the recognition of the IFJ press card, now we must move forward on an exchange with the police, especially in the context of their training, “said SNJ-CGT General Secretary Emmanuel Vire.

The next workshop of the Safety4Journalists project will be held in November in Croatia.