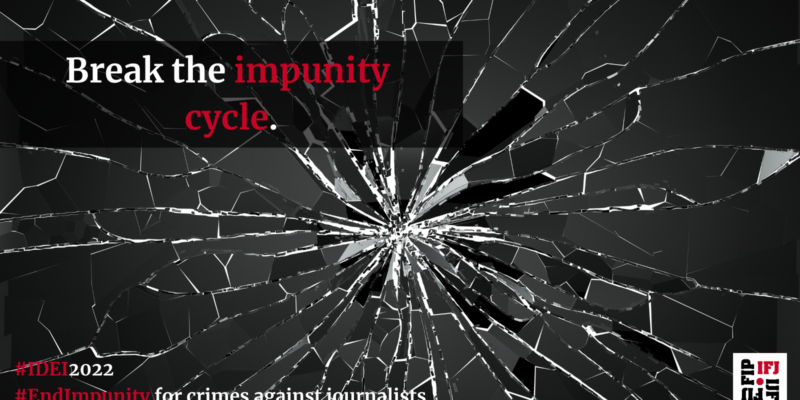 On this day, the EFJ reminds that all those who commit crimes against journalists must face justice, as such unpunished crimes have a strong chilling effect on media freedom.

The Council of Europe Platform for the Protection of Journalism records 26 impunity alerts involving 40 journalists: 14 in Kosovo, 6 in Russia, 6 in Ukraine, 6 in Turkey, 2 in Azerbaijan, 1 in Malta, 1 in the UK, 1 in Cyprus, 1 in Slovakia, 1 in Serbia, and 1 in Montenegro.

“It is a terrifying number,” said EFJ President Maja Sever. “The relatives of 40 journalists murdered or missing in Europe are still waiting for justice. And this number does not take into account the 21 journalists who have been killed in Europe since 2020 and who are not yet considered as cases of impunity. This is a shocking fact. We once again call on the judicial and political authorities to do everything possible to combat the impunity that gives free rein to the killers of journalists.”

Here is the list of 40 killed or missing journalists in Europe who are waiting for justice:

On this day, the EFJ joins the IFJ in welcoming the mobilisation of their affiliates against impunity in Europe.

Spain. The Madrid Press Association (APM) today inaugurated a space in its headquarters that will serve as a tribute to the Spanish journalists murdered in the exercise of their profession.  A photo of each journalist will be displayed.

Serbia. On 2 November, the Independant Journalists’ Association of Serbia (IJAS-NUNS) published a video about the state of impunity in the Western Balkans. The EFJ-IFJ affiliates in the region (BHJA, CJA, AGK, AJM, IJAS-NUNS and TUMM) are signing the IFJ Convention and publishing a joint statement.

Switzerland. Syndicom will support the IFJ convention on the safety of journalists and spread the IFJ call.

UK and Ireland. On 2 November, the NUJ will host a webinar to mark the International Day to End Impunity for Crimes against Journalists. The union will launch a short safety film featuring members sharing testimony about abuse, harassment and intimidation. The NUJ will also highlight a new mobile safety toolkit to help journalists protect themselves and their sources and technological ways to secure communications. The toolkit covers physical safety, information security, mental health care, health and safety at work and gives advice on how to take action against abuse on social media platforms.