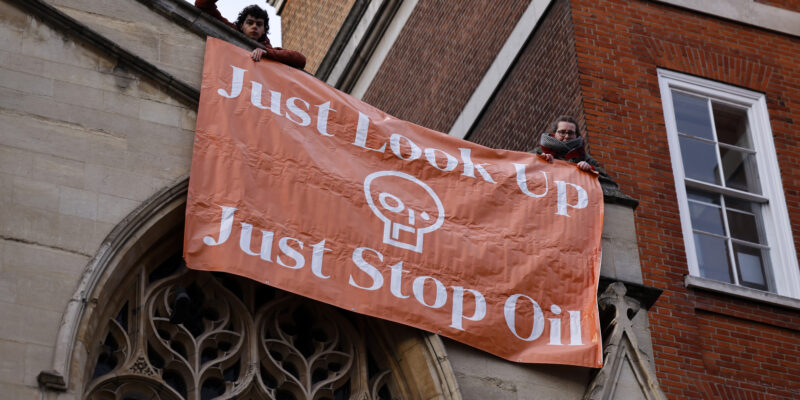 The European Federation of Journalists (EFJ) brought its full support to the Spanish and British journalists arrested and detained for covering climate actions this month and joined the Federación de Sindicatos de Periodistas (FeSP) and National Union of Journalists (NUJ) in condemning the arrests.

Across the world, climate activists increase the number of actions to raise awareness around the climate crisis. Mouvements such as Futuro Vegetal in Spain and Just Stop Oil in the United Kingdom have recently been on the forefront of the climate scene with impactful actions, resulting in arrests of activists and, worryingly, of journalists and media workers.

On 6 November 2022, in Madrid (Spain), El Salto contributor Joanna Giménez and a photojournalist were arrested as they were filming an action by Futuro Vegetal activists at the Prado Museum in Madrid where two activists glued to the frames of two paintings by the Spanish artist Francisco Goya (La Maja Desnua and La Maja Vestida). Giménez was arrested despite giving proof that she was a journalist covering the event as a matter of public interest, and not an activist. She was forced by the National Police to stop recording, arrested, and taken to the Arganzuela police station. If found guilty, her and the photojournalist could face between six months to three years in prison, or a fine.

“The arrest of two journalists for taking pictures of a protest at the Prado Museum is a totally disproportionate measure,” wrote the Spanish union FeSP. “They should be released and the right to information should prevail.”

On 7 November 2022, in England, journalist and filmmaker Rich Felgate and press photographer Tom Bowles were arrested as they were getting ready to cover a Just Stop Oil protest on the M25 motorway, near Kings Langley in Hertfordshire. They had just arrived on site to film from a public footbridge over the motorway, when two members of Herts Police approached them, asking them to stop reporting and come with them, handcuffed. Felgate recorded Bowles arrest.  The video shows the policeman did not reply positively to Bowles’ request to show him his press card, telling him he was on site “as a member of the press”. Bowles was held in custody for over nine hours, while Felgate remained in custody for 13 hours. Bowles’ home had been searched before his release, waking his wife and daughter.

A day after, on 8 November 2022, LBC journalist Charlotte Lynch explained she was also arrested by Herst Police for covering a Just Stop Oil event. She was on a footbridge, observing the event, when the police started questioning her. She showed her press card and explained who she was and was she was doing, but the police decided to arrest her. According to an interview of her on LBC, the reason given for her arrest was that she was witnessed taking videos of the protester and taken into custody on “suspicion of conspiracy to commit a public nuisance”. Lynch was detained for five hours.

Michelle Stanistreet, General Secretary of the National Union of Journalist (NUJ), commented” “The NUJ is disappointed to hear of the breach of journalists’ rights at recent Just Stop Oil protests. Film makers and photographers play an important role in relaying accurate information and quality journalism to members of the public. Journalists have every right to protect their sources and should not be pressured into revealing private communications.”

In the UK, the Public Order Bill’s new measures are giving the “police’s powers to respond more effectively to disruptive and dangerous protests”, as can be read on the government’s website, and has a chilling effect on media freedom.

The recent climate actions come in response to the UN recognising the impossibility of staying below the Paris Agreement increase limit of 1.5° of average temperature compared to pre-industrial levels.