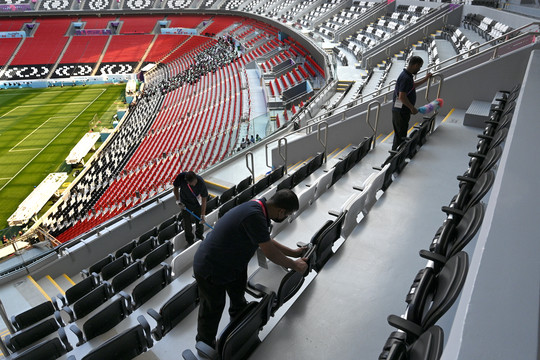 A Danish TV2 team was prevented from filming in a public space in Doha, Qatar’s capital, on 15 November. Security officials tried to cover the camera and interrupted the live broadcast, in what constitutes one of the first infringements on media freedom against international journalists accredited to report on the World Cup. On the occasion of the start of the football World Cup, the International Federation of Journalists (IFJ) published a 7-point safety advisory to support journalists’ and media workers’ reporting on the ground.

1. Restrictions on topics and places: While Qatari authorities claim reports on strict conditions placed on media are “inaccurate” and that “thousands of journalists report freely and without interference each year” journalists accredited to cover the World Cup may be subject to restrictions on reporting on certain topics, such as the situation of migrant workers or the LGBTQI community in the country. In addition, they will be prevented from filming at governmental buildings, universities, private properties and places of worship, according to the rules published by the Qatari government, to which journalists abide when accredited. Reporters should also expect to come under surveillance and monitoring of their moves. This may entail denial of access to certain places, threats to withdraw their accreditation, and arrests if not abiding by the law.

2. Secure contacts and equipment: Media professionals should source crucial contacts in the country (embassies, consulates) and work out secure means of communication in case they get into trouble. It would be advisable to have reliable equipment and seek to send and/or store sensitive material (footage, images, etc..) in a backup system, preferably sending it to headquarters before publication or broadcast from Qatar.

3. Expect you are being subjected to surveillance: All foreigners visiting Qatar are required to download two mobile applications: the official World Cup app Hayya and Covid-tracking app Ehteraz, operated by the Ministry of Public Health with the aim of “monitoring covid spread”. Reporters should be aware that these are very intrusive apps that give the Qatari authorities wide access to people’s data while in the country. These apps have been labelled by privacy experts as a form of spyware because they grant access to read, delete or change content, make direct calls as well as connect to Wi-Fi and Bluetooth.

4. Familiarise yourself with Qatari media law: Qatar amended its penal code in 2020 to introduce a new article under the ‘Crimes against Internal State Security’ section, which imposes up to five years in prison and fines up to 100.000 Qatari rials (around €26.000) for spreading ‘’fake news” or rumours with ill-intent. The legislation does not define what is rumour or fake news, which gives unacceptable room for interpretation.

5. When dealing with law enforcement agents: Media workers should not be compelled to show, hand over or delete their material. This should be communicated always in a non-confrontational manner, asking for access to their consulate/embassy if things escalate. Sometimes, the fear of exposure to the outside world can help diffuse tensions.

6. Be aware of conduct: While the IFJ opposes all unjust restrictions imposed by governments in any country regarding personal freedoms, reporters should be mindful of Qatar’s strict morality laws, according to which the display of affection between non-married or same-sex people is not tolerated. In fact, this may serve as an excuse to arrest/deport journalists under the cloak of inappropriate behaviour.

7. Watch out for situations of violence: Incidents of violence can erupt during matches at the stadium or around them between supporters of rival teams. Journalists should always be mindful of this risk and monitor the mood in sizeable crowds. They should carefully choose safe areas from which to report these incidents and leave safely or seek protection from the authorities if the situation becomes too dangerous.