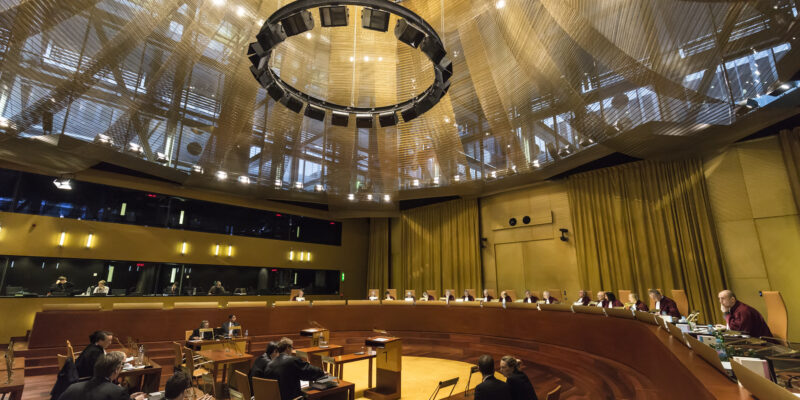 Credit: Court of Justice of the European Union


In a landmark decision on 22 November 2022, the Court of Justice of the European Union ruled that the EU anti-money laundering directive’s provisions on access to beneficial ownership registers are “invalid”. The court found that the directive (AMLD5, 2018) interferes with the privacy and personal data protection rights of beneficial owners and should therefore not be made available to a wide public. The European Federation of Journalists (EFJ) denounced a decision restricting the freedom of information in favour of business interests.

The European legislation was adopted in 2015 with the objective to combat money laundering and terrorist financing by making information of beneficial ownership accessible to the public. Considered as an important tool against financial secrecy, it required Member States to oblige corporation and businesses to publicly disclose who owns them. Such registers have been instrumental for International journalistic investigations, such as #OpenLux, shedding light on Luxembourg’s financial and fiscal activities.

In a press release, the court argued that the public access to information was “seriously interfering with the fundamental rights to respect for private life and to the protection of personal data”.

While the court ruling recognises the “legitimate interest” of both the press and civil society organisations in accessing beneficial ownership information, journalists, anti-corruption and transparency organisations have strongly criticised a decision which further restricts the already limited access to public interest information on businesses. The decision has already led to the immediate closure of the registers in Luxembourg and the Netherlands on Wednesday, the day after the ruling.

“To deprive journalists of this source of information, which allowed, among other things, the launch of the #OpenLux, is tantamount to taking their eyes off the ball. Excluding citizens from access to the data of the Luxembourg Business Registers, is to deprive them of an essential right to know,” said the Luxembourg Association of Professional Journalists (ALJP)

Helen Darbishire, from Access Info Europe, commented: “Do we really go back to a stage where the only way we find out about wrongdoing is when courageous whistleblowers leak documents? Is preventing financial crime through transparency not better than prosecuting it after it has occurred?”

“This is a great set-back for civil society organisations and journalists detecting and fighting corruption, identifying conflict of interests and more”, said Maja Sever, EFJ President. She added:

“This decision is all the more worrying that we had welcomed the fact that the transposition of the anti-money laundering directive has helped to improve transparency in media ownership. And we are now advocating for binding rules on media transparency in the proposed Media Freedom Act, as transparency is crucial to fight media capture and to gain trust in the media. In line with the European Data Protection Supervisor, we believe that the Media Freedom Act should explicitly specify the objective(s) of public interest regarding information on media service providers and in particular their beneficial owners.”

The 6th EU Anti-Money laundering Directive currently in discussions should reconcile public access and public interest with data protection and privacy rules.The EFJ urges the European Parliament and the Council to recognise the role of the press and civil society in fighting money laundering.