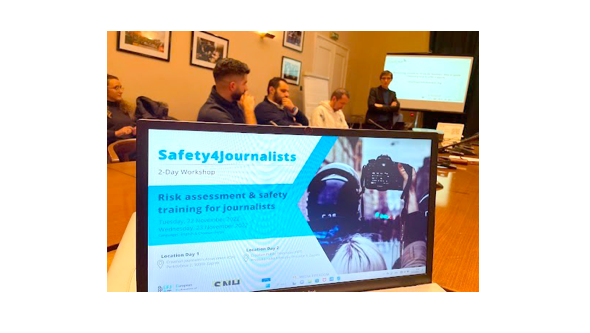 
Twenty-six trade union representatives and journalists from the Balkans region received a 1.5-day training on safety in Zagreb, Croatia, on 22 and 23 November 2022. The practical guidance focused on how to be safer at work and the responsibilities of employers, with a particular focus on the different threats facing journalists. The training was organised prior to the International Day for the Elimination of Violence against Women on 25 November to draw attention to the increasing violence facing female journalists.

Neus Vidal from the European Centre for Press and Media Freedom (ECPMF) gave a regional overview of the situation. She presented the Media Freedom Rapid Response (MFRR) data that more than 400 cases of attacks on journalists were recorded in the EU and candidate countries so far in 2022. The most common attacks are verbal assaults online, most of which were targeted at women.

International expert David Bevan, founder of Cadre Consultants, then gave practical training on what female participants can do to better protect themselves from online attacks and during demonstrations – and what their male colleagues could also watch out for. He emphasised that any safety strategy should think about the threats that women might face. He also emphasised that media managers and decision makers should meet frequently to discuss these threats as well as the safety of journalists more broadly.

“When it comes to the safety of journalists, one should be proactive not reactive. Security is best when it is worked on preventively, when protocols and tools are created to prevent questionable situations,” explained Bevan.

Bevan also focused on the fact that media organisations are obliged to protect their journalists but often this does not happen in practice. Nonetheless, the obligations of employers, the authorities and the police were addressed during the roundtable discussion which followed his training session. Representatives from the Croatian Ministry of the Interior, Culture and Media, and Justice were part of the panel that also included two Croatian journalists who were facing online and physical threats, EFJ safety expert Adrien Collin, and David Bevan. The discussion was moderated by EFJ and TUCJ President Maja Sever.

The roundtable discussion will pave the way for concrete proposals and dialogues carried out by the TUCJ and CJA with the police and the Ministry of the Interior to implement protocols and form an agreement on how to protect journalists during demonstrations. The practice of filing criminal charges against journalists by way of reprisal was also raise with the Ministry of Culture and Media, who stated that the Croatian government would support the “early dismissal mechanism” proposed in  the European Commission’s anti-SLAPP directive currently in discussions.

The training the following day was held at the Croatian public broadcaster, HRT. Editor-in-chief Marija Nemčić opened the session recognising the responsibility of editors towards their journalists and that new training is required to respond to new, more complex threats.

“We face dangerous situations that are more complex. … As a boss you feel responsible because you don’t remember to ask your team how they are after being exposed to threats.” – Marija Nemčić

Victor Hugo Ricco from the International Labour Organisation (ILO) then led a session on how unionists and journalists can use the Occupational Safety and Health Convention 1985 (No. 155) and the Violence and Harassment Convention (No. 190) so that countries implement the appropriate work health and safety legislation. In particular, he emphasised that Convention 190 is gender-inclusive, meaning that it recognises that gender-based violence in the workplace disproportionately affects women and girls, and so tackling its underlying causes and risk factors is essential.

Ophélie Latil, founder of Dames Oiseaux, trained participants how to respond to gender-based attacks at work and gave examples of daily tactics for employers and journalists to normalise the discussion on violence against workers. She also gave tips so that unions can deal with complaints regarding sexual- or gender-based attacks online and in the workplace.

This workshop was co-organised by the European Federation of Journalists (EFJ) and the Trade Union of Croatian Journalists (TUCJ) with the financial support of the European Commission. The group was hosted by CJA and HRT. The next workshop of the Safety4Journalists project will be held in February in Sweden.