EFJ contributed to the 2023 Commission’s Rule of Law report 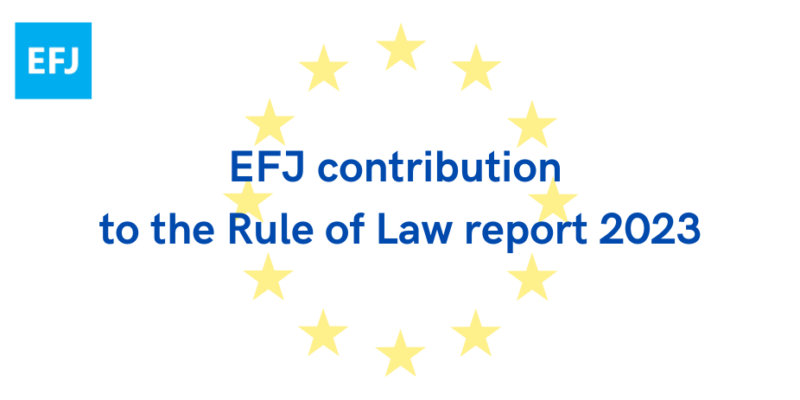 The European Federation of Journalists (EFJ) sent on Friday its contribution to the Commission’s Rule of Law report, which reviews every year four key areas: justice systems, the anti-corruption framework, media pluralism and freedom, and checks and balances. The issues found in most of the countries surveyed are all related to media concentration and the increasing number of SLAPPs. The objective of this consultation – jointly carried out with the EFJ affiliates – is to feed the assessment of the Commission with factual information from the ground in each Member States.

Read more of the EFJ’s contribution:

“Over the past six months, we have witnessed the sharpest deterioration of media freedom since the establishment of the mandate of the OSCE Representative on Freedom of the Media (RFoM) 25 years ago; no one can afford to look away, not to act and not to stand up”, said OSCE Representative on Freedom of the Media Teresa Ribeiro while presenting her report to the Permanent Council in November 2022.

Amidst the unprecedented attack on democratic freedoms in Ukraine, the European Federation of Journalists has monitored with its partner organisations serious violations of media freedom throughout Europe including in EU’s member states in 2022. According to a report published by the Media Freedom Rapid Response (MFRR) compiled by the European Federation of Journalists (EFJ), the International Press Institute (IPI) and the European Centre for Press and Media Freedom (ECPMF, ) the MFRR documented 415 media freedom violations in the EU Member States throughout 2022. Verbal attacks, including harassment and threats were the most common types of violations (176 alerts), followed by legal incidents (113), and physical assaults (85). The Council of Europe Safety of Journalists Platform recorded 289 verified alerts, of which 110 in the EU (including 54 cases of harassment and intimidation, 20 cases of physical attacks and 6 cases of detention and imprisonment of journalists). In 38% of cases, the source of the recorded threat was the state, the public authorities.

The economic crisis of the printed press has accelerated in particular in smaller EU member states, like Slovenia, Croatia but also Italy, Greece, Portugal and Spain to name a few, to a point that the public right to know is seriously endangered, in particular at local level. The often recited and growing “news deserts” have indeed a serious impact on democratic procedures including elections and the rule of law. Their current crisis, aggravated by the changed consumer habits and falling advertising revenues, represents a major threat to media pluralism in Europe. This situation has paved the way for domestic business forces linked to political parties or governments in each country to move in and buy up much of the media markets, after which editorial lines were flipped and critical journalists purged. In some countries like Hungary it seems almost irreversible, in others like in Poland, Bulgaria, Slovenia and Czech Republic it has reached a most worrying state. In France, the political and general information press is now found in the hands of a small number of men and companies whose main activity is often far removed from the world of information and its principles according to French Senators. In particular, the French billionaire Vincent Bolloré shows how quickly a pluralistic system can be poisoned by such an unprecedented control over media. His corporate control on journalists and authors  has endangered the very essence of journalistic editorial independence in France. All this aggravates dangerous disinformation campaigns disrupting our democratic values.

All these developments go hand in hand with the unprecedented power of platform dominance and its attention driven click bait oriented business model, which contradicts public interest values in journalism. In this toxic environment it is a challenge for journalists and the growing precarious freelance community to uphold professional and ethical standards, which is the core of independent journalism.

From March 2023, EU Member States will report to the Commission on the measures adopted following its Recommendation of 2021 on the protection, safety and empowerment of journalists. While the EFJ welcomed this Recommendation and invited its affiliates to actively advocate for its implementation at national level,  we urge the Commission, to do a rigorous implementation exercise and also refer to the 2016 Council of Europe Recommendation on the protection of journalism and safety of journalists and other media actors as well as Recommendation CM/Rec(2022)4 of the Committee of Ministers to member States on promoting a favourable environment for quality journalism in the digital age (adopted on 16.03.2022), which was signed by all EU MSs and  would further strengthen media freedom in Europe.

And last but not least, the Audiovisual Media Services Directive (AVMSD) requires that national regulatory authorities and bodies be functionally independent from their respective governments and from any other public or private body. This independence requirement, which in many EU MSs is not guaranteed,  must be upheld, including in the proposed European Media Freedom Act the independence of the Board must be guaranteed.

In the process of preparing its annual Rule of Law Report, the European Commission holds regular dialogues with EU Member States’ authorities, which we appreciate. As already stressed in our recommendations of the last years, it is crucial that all relevant stakeholders including journalists’ organizations be involved in the process of developing the country-specific recommendations. We reiterate the need to implement the recommendations published by EFJ together with press freedom and civil society groups, see here.  Last year’s report placed particular emphasis on safeguarding the governance and editorial independence of public service media in Cyprus, Czechia, Hungary, Malta, Poland, Romania, Slovakia and Slovenia. Follow-up is to be enforced. Also covered were threats to the physical and online safety of journalists and tackling the use of abusive lawsuits to silence journalists (SLAPPs). The following report shows that SLAPPs continue to be a major threat for media freedom.

The EFJ and its national member organizations have collected information, provide updates however it has not been possible to monitor everything also given diverging strength of its members’ resources. The work of the CMPF and its Media Pluralism Monitor and the Mapping Media Freedom, both financed by the European Commission, is a most useful and reliable resource.