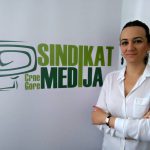 The Steering Committee in its expiring mandate did not have a member who would represent the Western Balkan countries and in my opinion this needs to change. Current situation in media is almost identical in the countries of our region in terms of the way employers treat us and in terms of general working conditions. Still, situation in media is completely different compared to the situation in the newsrooms of states which a long ago fought for the rights and working conditions, which we have yet to achieve.

Therefore, in my opinion it is very important that our voice is heard in the Steering Committee, and that we are more present in the EFJ in order to increase our impact, with help of our more experienced colleagues. In this way, I believe that we would also at least partially stop degradation of both professional standards and labor rights which are get worse with every year.

The EFJ was very helpful to us over the past three years since the Trade Union of Media of Montenegro was founded, and I believe that together we could operate even better if we are directly represented in such an important body as the Steering Committee.  Through my engagement in the committee, the EFJ would be closer to many small but full members such as trade unions and associations from our region that face many problems. In that manner, the EFJ could act, monitor changes and also influence more quickly and effectively.

It is our duty as unionists  to constantly call for solidarity which must be strongly expressed in the EFJ and both small unions and organizations have to be represented in all bodies and at all levels of the EFJ and they need to feel that they are welcome.

Presence of the EFJ in the Western Balkan countries is necessary, because, for example there is no branch collective agreement in any of these countries. We ourselves are not able to fight for equal bargaining position and therefore we need help of the EFJ in terms of strengthening our capacity. So, in my opinion this issue should be the focus of the Steering Committee in the next mandate.