Italian journalists protest against attacks on press freedom in Turkey 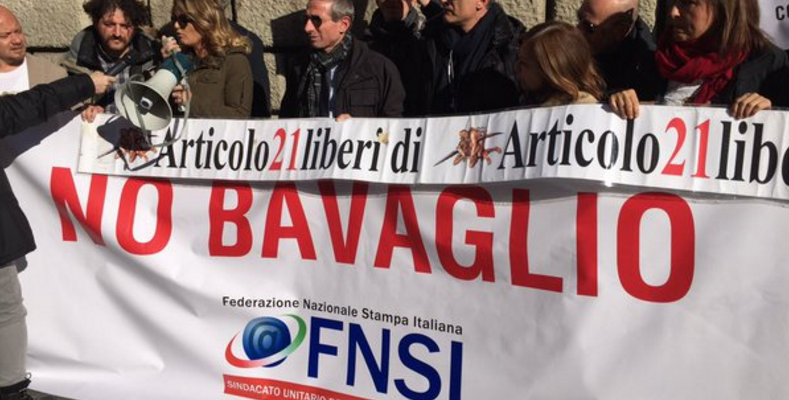 
The Italian National Press Federation (FNSI, EFJ-IFJ affiliate) together with USIGRai, Articolo 21, RSF Italy, Amnesty Italy and other press freedom groups organised a demonstration today (21/01/2016) in front of the Turkish embassy in Rome  to protest against grave attacks on press freedom in Turkey. This includes the ongoing prosecution of journalists Ceyda Karan and Hikmet Cetinkaya in Turkey for publishing the cover of the French satirical magazine Charlie Hebdo. The two journalists working for the daily Cumhuriyet are accused by 11 plaintiffs (including family members of the Turkish President Recep Tayyip Erdogan) of “deliberately willing to humiliate the religious values of the big part of the population” and “inciting publicly to hatred and hostility”. The publication of the controversial cover by the Turkish journalists was a act of tribute to defend press freedom and to commemorate the victims of Charlie Hebdo attacks of January 2015. Cumhuriyet daily was the only newspaper to publish a Turkish version of the special edition of the satirical magazine following the terrorist attack in Paris.

Can Dündar, the editor in chief of Cumhuriyet under arrest since November 27, 2015, wrote a letter from Silivri jail to the Italian Prime Minster Matteo Renzi reminding him of his commitments towards Turkey and asking him to intervene in defending press freedom in Turkey.

This afternoon, the representatives of the FNSI will meet with the office of the Italian minister of Foreign Affairs to outline the reasons for this demonstration entitled “#nobavaglioturco” and ask the ministry for a response to the letter written by Can Dündar.

The European Federation of Journalists (EFJ) shared its supports with FNSI members and all colleagues in Italy protesting against the permanent prosecution of journalists in Turkey.
For more information in Italian see: http://www.fnsi.it/Contenuti/Content.asp?AKey=18085
Photo Credit : Mattia Matta, FNSI