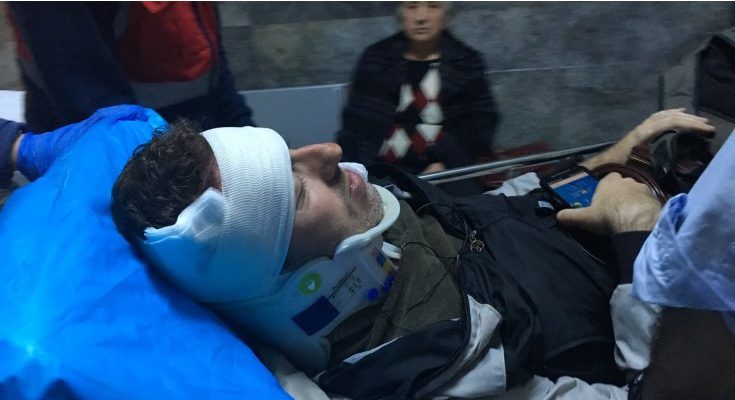 
A radio journalist has been brutally attacked (in picture) on 4 February by unknown assailants while covering a massive rally in the capital, Athens. The International and the European Federations of Journalists, (IFJ) and (EFJ), have joined their Greek affiliate, the Journalists’ Union of Athens Daily Newspapers (JUADN), in calling upon the authorities to condemn the attack and open a prompt investigation.

Reporter Demitrios Perros, working as a freelance for municipal radio Athens 9,84FM, was severely attacked by unknown assailants on 4 February in the afternoon while covering the protest rally organized by GSEE and ADEDY (public and private sector workers confederations).

The journalist was approached by strangers on Panepistimiou Street, in the center of Athens, and asked whether he was a journalist. When he answered positively, they started hitting him with wooden planks on the head and the spine while the police stood by without intervening, JUADN reported. Demitrios Perros got severely injured in the head and the face and was taken to the Red Cross hospital by other colleagues.

“We stand in solidarity with our Greek colleagues and call upon the authorities to immediately condemn this brutal attack to journalist Demitrios Perros and to open a prompt investigation in order to find and punish the perpetrators,” said IFJ President, Jim Boumelha.