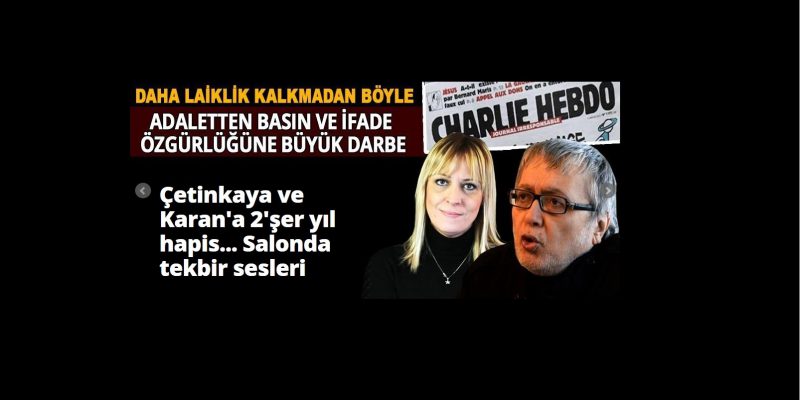 
The European and International Federations of Journalists (EFJ and IFJ) have today condemned the sentencing of two prominent Turkish journalists to two years behind bars for illustrating their columns with a cartoon of the Prophet Mohammed published by French satirical weekly Charlie Hebdo.

Journalists Ceyda Karan and Hikmet Çetinkaya, from the independent Cumhuriyet daily, were sentenced to two years each in jail by an Istanbul criminal court today. They went on trial in January last year on charges of “inciting public hatred” and “insulting religious values” after illustrating their columns with the controversial cartoon. Bulent Utku, lawyer for Hikmet Çetinkaya and Ceyda Karan, said they will appeal the ruling at the appeals court.

On January 14, 2015, Cumhuriyet had published a four-page Charlie Hebdo pullout translated into Turkish marking the French satirical weekly’s first issue after the deadly terrorist attack on its Paris offices. The edition did not include the controversial front cover featuring Prophet Mohammed, but a smaller version of the cartoon was included twice inside the newspaper to illustrate columns on the subject by Karan and Çetinkaya.

Cumhuriyet daily has been regularly targeted by prosecutions. Its editor-in-chief Can Dundar and Ankara bureau chief Erdem Gul are currently on trial on charges of revealing state secrets and could face multiple life sentences if found guilty.

The EFJ and the IFJ denounce this new attempt to intimidate journalists in Turkey. Both organisations have today demanded the review of Ceyda Karan and Hikmet Çetinkaya’s two year jail sentence.

An alert was submitted by EFJ/IFJ, Article 19, Index, IPI and RSF to the Council of Europe platform for the protection of journalism and safety of journalists.