Press freedom must be a part of any agreement with Turkey 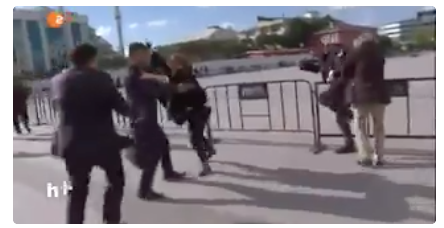 
The European Federation of Journalist (EFJ) has strongly condemned the assassination attempt on 6 May in Istanbul against journalist Can Dündar (editor-in-chief of Cumhuriyet daily newspaper) and the jail sentences of 5 years and 10 months for Can Dündar and 5 years for Erdem Gül for procuring, revealing and publishing state secrets. Cumhuriyet published in May 2015 footage that show Turkey’s state intelligence agency ferrying weapons into Syria in 2014, the journalists have since been accused of revealing state secrets.

“This new verdict is clearly unacceptable, in contradiction with Turkey’s Constitutional Court ruling and nobody can claim of a fair trial since the court decided to hold the trial behind closed doors”, said Mogens Blicher Bjerregård, EFJ President. “We urge Turkish authorities to guarantee the safety of journalists, to prosecute all media freedom violators and to respect press freedom. This grave incident must receive a firm reaction by international institutions, the European Union and the Council of Europe and it shows press freedom must be part of any agreement between EU and Turkey”, said EFJ President.

“In the space of two hours we have experienced two assassination attempts: one was done with a gun, the other was judicial,” said Can Dündar (editor in chief of Cumhuriyet) speaking in front of the court after the verdict was announced. “The jail sentence we received are not just to silence us. The bullet was not just to silence us. This was done to all of us, to scare us into silence, to make us stop talking. We all have to be courageous, despite all of this, and defend the freedom of the press and the freedom to information”.

The journalists were acquitted on charges of trying to overthrow the government but convicted of publishing secret state documents. They still face charges of helping an armed organisation in a separate case. The journalists introduced a request to the Court of Appeal in Ankara, they will remain free pending the decision of this higher court.

Bullets fired at press freedom
“Neither bullets, nor politically ordered verdicts can beat the truth. We will overcome this blockade by supporting each other and using solidarity. There is no more you or me, together we are stronger”, said TGS (Journalists Union of Turkey) in a statement in support of attacked journalists.

“The bullets fired at Can Dündar were fired at the freedom of the press and expression in Turkey, as well as the public’s right to access the news. This attack, which attempted to silence journalists conducting critical reporting on the government’s stance on the war at our doorstep, was an open threat to everyone in Turkey who desires peace, those who are chasing the truth in the fight for peace and our colleagues who are attempting to practice their craft without toeing the government’s line”, added DISK-Basin Is (Union of press and publishing workers) in a press release to support journalists.

The EFJ will continue to follow and monitor the situation of press freedom in Turkey, support journalists and trade unionists and develop international solidarity to protect basic fundamental rights for public’s right to access information.